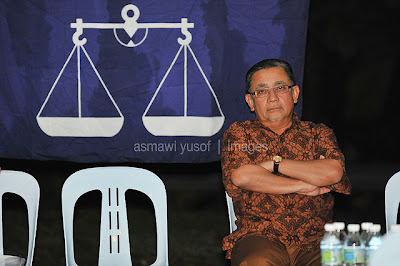 with thanks to asmawi yusof for the images

Our perception of UMNO is tainted by the wealth gathered by the families and cronies of past Prime Ministers and Ministers and by the decadent lifestyle of past and present BN politicians.

Pakatan Rakyat is still new at the game – but novice or not there are already fledging exponents within Pakatan Rakyat willing to chance shame and expose for quick financial gains. Could not a few years in federal government hone their ability to do it better? The thought of this possibility is indeed depressing!

The mistake we make is in thinking that Pakatan Rakyat can bring about change to the system of politics and Government, as we know it now – where money politic and political patronage is endemic. Neither those in Barisan Nasional or those in Pakatan Rakyat can live in a corrupt society without being corrupt ourselves!

Corruption is not only an UMNO problem. Corruption is a human problem. Our problem is that endemic and systematic corruption within all things Malaysian has made it part of our moral character and culture  - part of our way of life. Corruption is a manifestation that this Barisan Nasional government – the only government we have known since Merdeka – have failed in its duty of care towards our people – failed in its choice of what is morally and ethically correct to do.

When Mahathir became Prime MInister, corruption took a quantum leap forward - if doing such an illegal and despicable act could ever be said to move forward. For Mahathir corruption was a means to an end.

He took government fraud and corruption from something done in the back alleys, darkened rooms and behind closed doors of the powerful and the privilege to something that was done in Government, in Cabinet and in the office of the Prime Minister.

So Mahathir’s family is respectable? As respectable as a Mafia family can be when they get their wealth from corruption and profiteering! There are people in Malaysia today who think highly of Mahathir’s family but it is only because they don’t know his family as we do. Mahathir’s family become wealthy and ‘respectable’ when Mahathir reached the pinnacle of his career as a crook…err I mean as a politician (well they are both one and the same thing in as far as UMNO is concern!)

Now we face the future after the 13th general election still unsure if the aftermath of that general election will see us rid ourselves of corruption. Do not be too hopeful of that happening soon. To rid ourselves of corrpution work must start with the education of our children on its evil.  Work that would take at least a generation of Malaysian to even take hold. So let us choose our leaders well.

For now the two symbols of political leadership today in Malaysia is Najib and Anwar -  each with enough extra baggage to be refused a seat on any flight – domestic or international  - even if they offer to pay for the extra kilograms! But they are all we have for now!

Sometimes you have to think with your heart. That time, for our country, for our people and for our future is now. All that we need to know about these two people have been in the public domain for all of us to see and ponder, dissect, agree of disagree for far too long a time. Even the Courts have had their say but I am sure that there will still be stories to tell in the days to come. And what has not yet been told about these two people are not worth knowing because it must have happened so long ago that it will have no relevance to the times that we now live in. What we are all asked to do now is to choose who, between the two of them, shall be our leader! Who deserves to be Prime Minister of Malaysia!

Our country has never been in this situation before. We have never been given the opportunity to choose who we want as our leader in the first instance. In the initial appointment of Tunku, Tun Razak, Hussein Onn, Mahathir, Pak Lah and Najib as Prime Minister, the people were not consulted. Always UMNO decides.

Today things are different. We have a choice. If we vote BN we choose Najib. If we vote Pakatan Rakyat we chose Anwar. Who shall we choose?

Najib will not have it easy. Even if the Rakyat gives him victory he will still have to answer to UMNO – or should I say Muhyiddin? If he fails to win back Selangor and secure two third majorities in Parliament – then he is just warning up the seat for Muhyiddin.

For Anwar all he needs is a simple majority and he will rule from Putrajaya. Who then shall we chose?

I believe that of the two Anwar has been tried and tested and not found wanting in his ability to survive and serve as a political leader. He stands resolute in the face of all that UMNO can throw his way. For all that he and his family has endured I believe they are the better for it. We have need of leaders of his caliber. And with him he brings Azizah and Nurrul! What more can we ask? ABU!
Posted by STEADYAKU47 at Sunday, July 15, 2012