With thanks to Donplaypuks: 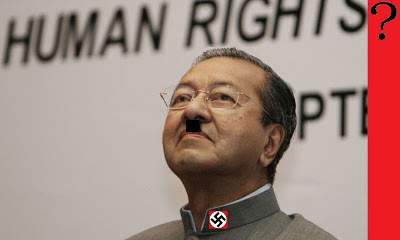 Has there been a more loathsome, reviled, offensive, malevolent, repulsive, abhorrent and abhorred person in Asian politics than this man who claims he is a Constitutional Malay, but not an Indian even though his father was a Keralan of India descent? Since when, and by what logic or magic, did religion change anyone's DNA?

And I exult now that he has fallen on his own sword in his continuing vendetta against the man he (and UMNO/BN) fears more than anyone else, Anwar Ibrahim.

In his haste to anyhow link Anwar Ibrahim to the infamous and traitorous 'Project M Blue Identity Cards (IC) and Citizenships For Sale To Muslims' scandal, to illegally re-engineer the population mix in Sabah during his tenure as Prime Minister of Malaysia from 1981-2003, Dr. Mahathir Mohamad has over-played his hand.

What Mahathir achieved is without a shadow of a doubt, treasonous.

Blue IC's and citizenships were sold and manipulated to enable illegal immigrants and/or their documents to be deployed to vote in favour of the ruling UMNO/BN coalition, at by-elections and State and Federal elections. There is no way that someone like Deputy Minister Megat Junid, who reported directly to PM Mahathir, would have proceeded of his own accord in these blatantly criminal acts, without the specific involvement and directions of his boss, Mahathir!

Mahathir is guilty up to his neck as the mastermind behind this racially biased and religiously bigoted scheme to hang on to power.

CLICK HERE TO READ MORE AT DONPLAYPUKS
Posted by STEADYAKU47 at Friday, February 01, 2013