The Wisdom of Mahathir? 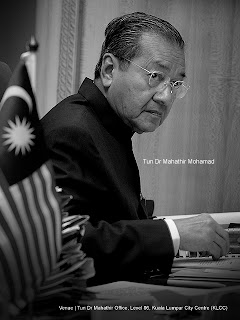 "The truth is the Malays are not very discriminating and they don’t make analysis. They don’t calculate. It is beyond them.  Like the Arabs and the US. The Arabs are killing each other. To the US, that’s good. they don’t have (to kill the Arabs). To the Americans they are (the Arabs) Muslims whether they are Shiite, Sunni or Wahabbi. For the Muslims, there are the Shiite, Sunni and Wahabbi so we must fight each other. This is happening in Malaysia now, We don’t have to do anything. We want to defeat the Malays - the Malays will cause their own defeat".
Tun Dr Mahathir Mohamad

Steadyaku47 comment:
Yes Tun the Malays are not very discriminating in many things. Their choice of leaders for one. But how were they to know that this Malay Doctor from Alor Setar would evolved into one of the worst tyrant our country has ever known and in the process this same tyrant abuse the trust place upon him by the Malays.

You talk as if ‘THE Malays’ were not your own people. “THEY don’t calculate. It is beyond THEM”. Do you not consider yourself a Malay Tun? Is not a Mamak also a Malay as defined by the government you led? As I suspect ethnicity is a tool used by UMNO to further their own agenda – that of getting power! And once in power Ketuanan Melayu is the means for you, your cronies and your family to enrich yourselves! Harapkan pagar pagar makan padi! It is indeed beyond a Malay understanding to have one they consider their own take advantage of the trust they have placed in them.

Your analogy of the Muslim fighting each other does not do justice to you Sir when you apply that to what the Malays are suppose to be doing to each other here in Malaysia – and by so doing, will cause their own defeat. You, of all people Tun should know better. It is UMNO under your watch that have cause the Malays to lose their dignity, their self respect and their ability to hold their heads high with pride when confronted by the other races in Malaysia.

The Malays had nothing to do with spending RM$20 blllion to build Putrajaya. You did Tun.

The Malays had nothing to do with the construction of a crooked bridge to Singapore. You did Tun.

The Malays could only watch while you and your cronies plunder and pillage the wealth of our nation for your own account –  one sided IPP contracts awarded to your cronies, negotiated tenders negotiated to favor your cronies and not the nation, hundreds of millions of Ringgits used to bail out your son’s business…all this is not the doing of the Malays Tun. It is yours.

And if because of all this the Malays were to fail to achieve parity with the other races, then it is not the fault of the Malays Tun. It is yours.

So you Tun, of all people, should know better what you did to plague the Malays with money politics and the debilitating reminder to the Malays that they needed to be ‘protected’ and ‘spoon fed’ if they were not to fall prey to the avarice of the Chinese.

Now we know there was no such threat.

Now we know that labeling the Malays as Bumiputras was merely a ruse by  UMNO to legalize their thieving from our national coffers at the expense of the Malays.

You Tun have wrecked much damage on our people, on our country and on our ability to live as Malaysian because you divide and rule amongst us all for your own purpose. And I pray that you will live long enough to see UMNO pay the price for your abuse of the trust place upon you by the Malays, by the people of this country and by your callous disregard for any one else interest but your own! And that price, we hope, is defeat of UMNO at the 13th general election! ABU!
Posted by STEADYAKU47 at Monday, November 28, 2011