Even with 18,000 new votes on its roll courtesy of RNC,
Keadaan Terkawal di Lembah Pantai
So says our 'defection proof' MP 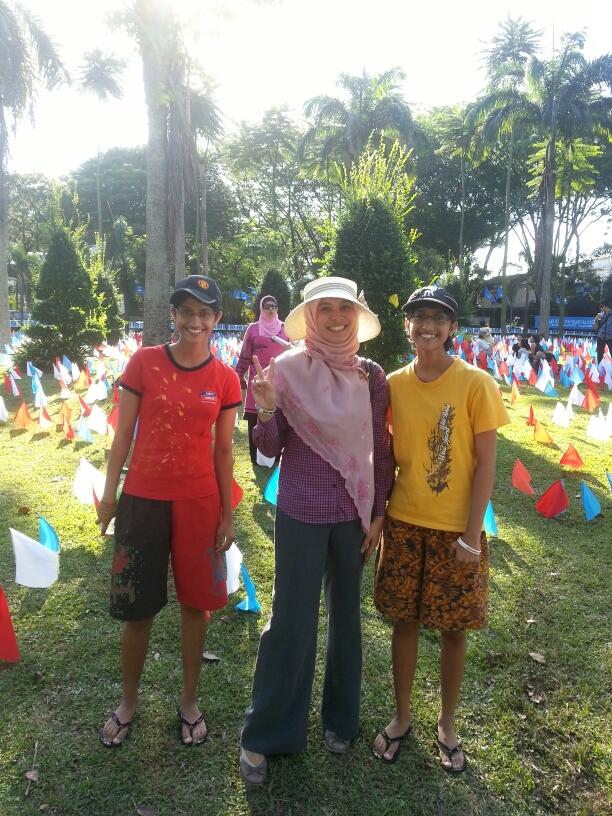 with thanks to Malaysian Insider

In Lembah Pantai, Nurul Izzah fights Nong Chik with ‘flowers’
BY EMILY DING AND BOO SU-LYN
APRIL 17, 2013
KUALA LUMPUR, April 17 — A residents’ initiative planting coloured flags to support Nurul Izzah Anwar is now part of the incumbent Lembah Pantai MP’s campaign to defend her seat against Umno strongman Datuk Raja Nong Chik Zainal.
Miniature blue, white, and red flags — the PKR vice-president’s party colours — as well as electoral reform group Bersih’s bright yellow were planted at a Bangsar roundabout as part of residents’ “Malaysian Spring” campaign for political change over the weekend.
But the same group had to stand up to Kuala Lumpur City Hall (DBKL) officers who had plucked the “flowers” hours later on Sunday, citing transgression of city by-laws.
The residents later replanted the flags, after criticising the City Hall officers for ignoring similar transgressions by Nong Chik’s Barisan Nasional (BN) campaign officials with their billboards and flags.
Nurul Izzah said the idea to make the “Malaysian Spring” as part of her campaign came after “one of the residents called me and said, ‘We’re going to fight for this place’.”
“Then the suggestion came from resident lawyers — they said one of the ways to mitigate this is to adopt it formally as part of my campaign material. So if you (DBKL) would like to remove them (the flags), you first and foremost have to remove the other paraphernalia belonging to Barisan Nasional,” the 32-year-old lawmaker told The Malaysian Insider.
Nurul Izzah — the eldest daughter of Opposition Leader Datuk Seri Anwar Ibrahim — is facing interim federal territories and urban wellbeing minister Nong Chik in the May 5 polls, the second minister she is contesting against after defeating then-women, family and community development minister Datuk Seri Shahrizat Abdul Jalil in Election 2008.

Several residents described the incumbent Lembah Pantai lawmaker as “approachable”.Several Bangsar residents whom The Malaysian Insider spoke to called Nurul Izzah an “approachable” politician, while some — who were not even living in Bangsar — said they chose to volunteer for the “Malaysian Spring” campaign to end corruption and government abuse of power.
To date, 18,400 “flowers” have been planted, with Malaysian Spring organisers led by landscape architect Ng Seksan planning to plant a total of 28 million “flowers” in the country.
“It shows that she actually cares what we think as residents. She’s adopting a residents’ initiative, not the other way round,” said pharmacist Mithra Singam.
Mithra also pointed out that DBKL’s actions might have tipped some voters towards Pakatan Rakyat (PR).
“Some people may be neutral at first, but they see what happened and they get agitated and irritated and that’s when they start reacting and favour the opposition more,” she said.
Her sister, Simitha, an activist, said Nurul Izzah was a very helpful MP.
“Everything is just one tweet away with her. You know, there’s a pothole, you tweet her, you send her the picture and she’ll get it fixed,” said Simitha, referring to Nurul Izzah’s Twitter account, @n_izzah.
Retired landscape architect Carolyn Lau said she was happy that Nurul Izzah had made “Malaysian Spring” part of her campaign.
“She hasn’t had the financial goldmine, the piggy bank that the other party has, and she’s had to do things as effective and efficiently as she can,” said the 48-year-old.
Lembah Pantai, which has 72,553 voters, is a constituency of sharp contrasts, comprising the wealthy Bangsar where urbanites eat expensive macaroons, along with the low-cost homes in Kampung Pantai Dalam and Bukit Kerinchi.
Since his appointment as FT minister in 2009, Nong Chik has worked on various projects to uplift the constituency that includes the upscale Pantai and Bangsar neighbourhoods, as well as poorer sections in Brickfields and Pantai Dalam.
But businesswoman Shariffah Jamalah, who has been running a despatch service in Bangsar for 25 years, dismissed 60-year-old Nong Chik as “arrogant”, compared to the “humble” Nurul Izzah.
“Raja Nong Chik only appears when election is coming,” she told The Malaysian Insider yesterday.
“I was a BN supporter for three to four terms. I became a polling agent. But when I talk to them about my problems, they don’t listen. You don’t listen and you want us to support you,” Shariffah, 56, said.
Shariffah pointed out that Rela members were only deployed in Bangsar recently to fight a spate of crime in Lucky Garden in Bangsar, like snatch theft and robberies, saying: “Don’t do it just during election time.”
Posted by STEADYAKU47 at Friday, April 19, 2013