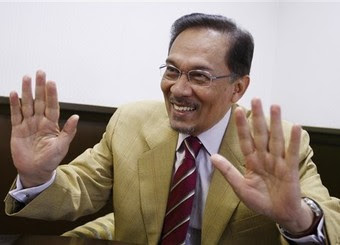 I remember the time when I wanted to meet up with him to find out what he was doing with his life. He was then teaching at one of the shop houses along Jalan Pantai – possible with Yayasan Anda if I am not mistaken. I did find him and he was indeed teaching and in slippers. At home that evening I casually told my father that I had met Anwar that afternoon. My father was then Director of CID. He stopped, looked at me and said sternly “Engkau tak ada kerja lain?” Whenever my father uses  “engkau” when addressing me I knew that he was not amused. And he then went on to lecture me as to why it would be in my best interest to keep away from Anwar!
Then I was away in Australia for a while and he became DPM. The next time I was back in KL I remember going to the Ampang Shopping center with my family and getting a few toys for our children at Toy R Us. As we walked up to the counter to pay there was Anwar. We hug and he smiled that smile that light up his whole face and then he was gone again out of my life for a few more years. But always the familiarity of old classmates made for easy banter every time we meet.

Then this time he was away for a while – six years I think – as the British like to say – at her Majesty’s pleasure in Sungai Buloh. I was with Zakaria Salleh, one of UMNO ex-Ketua Bahagian who had joined Keadilan when we heard that Anwar had been released and was at home. My friend wanted to immediately head for Anwar’s house to pay his respect. Would I like to come along? He asked. I said ok. We arrived and there were people everywhere. We got into line and waited our turn. We were told that Anwar was not well – that he was sitting down and that at anytime he might need to rest. After about an hour of waiting in line I eventually stood in front of him. He looked up from his chair, again with that smile of his, stood up and gave me a hug oblivious to what pain he must have felt. We talked for a few seconds and mindful of the others waiting to see him, I excused myself and walked on.

The last time I saw him was at a class get together in Bangsar – at Fauzi’s house, a school mate of ours who was the host - a few years back. As always his arrival was greeted with good nature ribbing by everyone and for the son of one of our classmates who had not seen Anwar before – that was a real treat. We sat and talked and I could see that age had caught up with all of us – Anwar included. He looked not as robust as I though he would be- after all he has always looked good whenever he was on TV and photographed well. But sitting beside me he looked vulnerable.

Was the pressure of living constantly under public and media gaze and scrutiny getting to him? Was UMNO getting to him? I could not imagine what he had to go through on a daily basis in what he chose to do – POLITICS. It is one thing to be DPM where everything is laid out for you, another to be in the opposition. He constantly referred to Azizah in conversation with us and we could see that Family meant a great deal with him. As we talked I found myself thinking what more has he got to endure before his work is done. I did not envy the situation he was in.

But he had no regrets. No wanting to take his pound of flesh from those that have done him ill. A more spirited discourse came from him when we talked about Mahathir – but either he was in control of himself or that he did not think it worth his while to think to much of times gone by. The present was what mattered.

At 63 I will not run if I can walk. Stand if I can sit. Talk if I can be quiet. Anwar has chosen the path less traveled. This path requires an uncommon resolve to move relentlessly forward no matter what. He stands in front of crowds everyday. He meets more people then he can remember everyday and all this he does with a willingness that belittle his age. He could be anywhere he wants to be in the world and be welcomed by world leaders and acquaintances. He could be in business and be rich beyond our wildest dreams. Instead he chose to serve the nation. He chose to take us to the next election because if Anwar does not do so, who then will take us? I am sure sometimes in his moment of solitude he must question his capacity to physically last the distance but his commitment to our cause is great. That will see him through and he has said many times that Azizah has done enough while he was away.

This is a good man. We all know he cannot sing well and neither can he dance well even if his life depended on it but he is decent man. I wish Najib and UMNO will do battle with him on a level playing field. I wish they could have enough compassion in their hearts to accept that Anwar had gone though more that a baptism of fire – a baptism that neither Najib or Muhyiddin could ever imagine or endure. But then it that would be like asking Bush to go fight Saddam one on one. No shock or awe, no overwhelming force meeting defenseless people, no doctrine of Rapid Dominance, no weapon of mass destruction on stand by just in case they are needed….none of the above. Bush would never survive. Neither would Najib against Anwar on a level playing field.

We know that Anwar was with UMNO many years back. We do not know what he will be in the future. But this I know now. He and the other leaders in Pakatan Rakyat are the leaders we now have to lead us to the next General Election and they give us our best hope for a new beginning. A new beggining without an UMNO that has already abused the trust we Malays placed in them many times over, without a corrupt PDRM, a cowered MACC, without a Government that steals from its people, without a Judiciary that does the bidding of its Political masters, without many of the injustices and unfairness that we now have.

Are these not reason enough for us to give them the opportunity to do so?