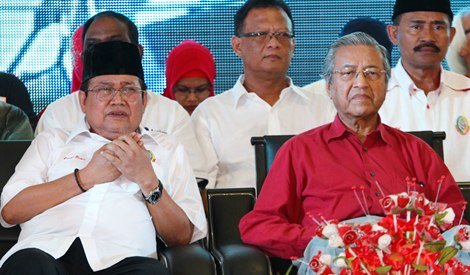 This is what Mahathir Mohammad, once Prime Minister of Malaysia for 22 years has been reduced to! Call it senility, call it a need or greed for attention call it whatever you like - but the sight of an old man way past his mental and physical best foolishly trying to be relevant in the madness of Malaysian politics will sooner, rather than later, show him for what he really has become - a foolish old man!

Those who love him should know better. Those who care for him should insists that there is more to life than putting one self out there for others to heap odium, spite and contempt on oneself. Those who have a vested interest in using Tun to further their political interest should by now cease this sad sandiwara of wheeling out an old man from a bygone era to further their own political interest.

What will Mahathir's last conscious thought on this earth be?

That he has done enough for UMNO to be eternally grateful for its survival to him? Huh! UMNO will treat Mahathir as Mahathir has treated Tunku, Musa, Ku Li, Ghaffar Baba, Anwar, Pak Lah and many others - not with respect but with contempt. Not with reverence but with utter irrelevance for what any of them has ever sacrificed for UMNO. Why is this so? It is so because of the culture that Mahathir himself has ingrained into UMNO! Today in UMNO holding on to political power is the only relevance to anybody existence - past or present. When it comes to the next UMNO President after Najib -  when it serves the President's interest -  Mahathir will be dead meat and be blamed for all of UMNO's ills and all his excesses will be put into the public domain for all to see - just as Mahathir has done to Tunku, Anwar and Pak Lah!

Will Mahathir in his last conscious thought on this earth think of his legacies - Proton, Putrajaya, KLIA, KLCC, Petronas Twin Towers, East West Highway....maybe...but surely all this will be dwarfed by what all this has cost our nation? By the massive frauds, mismanagement and abuse of executive powers to enrich countless undeserving cronies and political shabats - all at the debilitating expense to the people of our country? and worse the culture of materialism and insidious money politics and corruption that is now Mahathir's legacy (if you can call it that!) to our society!

Maybe Mahathir will think that the insane wealth he has allowed his children to amassed will be enough to keep them, their children and their children's children to the life they are now accustomed to....maybe....but without Mahathir and without UMNO in power how long do you think their wealth will last? The old Chinese proverb "that wealth does not sustain after the first three generations" may be true of the Chinese...but the Malays?  Look at Tajuddin Ramli, Amin Shah, Halim Saat, Lorraine Osman...and many many more Malays who became insanely wealthy through cronyism and nepotism...all their wealth gone before even their generation is gone! And yes, Syed Mokhtar too will join them in the not to distant future!

No I think Mahathir's last conscious thought on this earth will be one of regrets...many regrets.

How many only he will know but by then it will be too late.

Too late for regrets, too late to make right what has been wronged and too late for him to tell anyone that he is sorry..... sorry for his 22 years of being Prime Minister and sorry for his life after that...sorry for having not done better for the Rakyat that once believed and expected so much of him and sorry for a life lived only for himself and no one else. And by then no one will care...not the Rakyat and certainly not UMNO! Nor me or you!