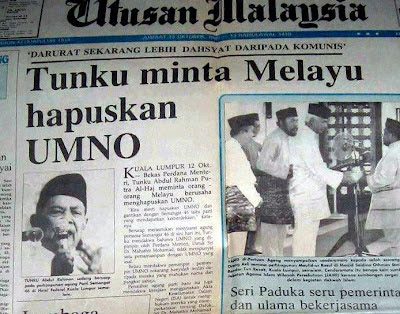 We Malays must realize that there has to be an expiry date for blaming UMNO for the situation we find ourselves in now. It will expires when we empower ourselves to separate UMNO from the Malays.  Amongst the Malays there is already widespread social discontent, political anger and public outrage at UMNO. Yet there is a   sense of fear and powerlessness to do anything against UMNO. This must be broken. We do not want to reach rock bottom before we start to rebuild our people up again. We need to start now.

Yes you can say that the fight has already started in 2008 when we voted in a credible opposition into parliament. But that is not enough. Some of you talk about your work on the Internet, Facebook and Twitter! But the Internet, Facebook and Twitter are just logistical support. In themselves they do nothing. The fight against UMNO must be started by the people. The fight can only begin when you physically move forward together with Pakatan Rakyat. Do not allow PDRM and other acts of state terror intimidate you.

UMNO no longer has popular support amongst the Malays. UMNO leaders now buy loyalty from those within UMNO to keep them in power. Loyalty from the elites within UMNO, and from the components parties within Barisan Nasional. And these people need to be rewarded for their loyalty – corruption is the enabler of choice.

We are fighting against an UMNO that is strong. With money and guns. Is all we can hope for is that Pakatan Rakyat will get its act together and UMNO will crumble from within?

Maybe so…but hope is not a strategy.

We Malays must inform other Malays what UMNO has done to the Malays and we must do so unapologetically. UMNO is so focus on killing the messenger that in doing so they have lost control of the message that we are telling to our own people. The message is this.

The Malays are angry and primed for change. We are building our strength from this anger. And Anwar Ibrahim is the symbol of this anger. What we need now is that spark that will ignite this anger into a tidal surge that is irresistible and irreversible to overwhelm UMNO and all that chooses to stand with UMNO. If Memali had happened now, with the Internet at our disposal, that would have been the spark to ignite our anger for the Malays will never stand for our own government to kill other Malays. Never ever!

Can 50 years of UMNO rule disintegrate in a matter of days if not weeks? You see what has happened in Egypt and Tunisia and you can only say that it can!

Najib cannot understand that it is him that we want gone. Not Anwar. Anwar’s privileged and burden is to lead us. UMNO has tried to stripped Anwar and many Malays of almost everything that we hold dear – our pride, our dignity and our integrity -  but they know they have failed in this endeavour.

I say we stand and fight. In Memali the BN government sent in 200 armed Policemen to kill 14 Malays. Against Anwar if all UMNO can throw at him are pornographic tapes then I say, “Bring it on!”.

We have many tales to tell of UMNO’s massive financial scandals running into the billions, audacious nepotism by Prime Ministers and Ministers, murders, corruption and greed on a scale bigger then Ben Hur!

Then there is the abuse of the Malaysian Judiciary, the Election Commission, PDRM and any damm government apparatus at thier disposal.

And the sex…ahhh the sex. It starts with the Prime Minister, his wife, the DPM and enough Ministers and UMNO elites to ensure that each decade is represented in its totality….and that includes components parties within the Barsian Nasional.

Bring it on UMNO…WE ARE READY!

First posted April 2011 with update where appropriate.
Posted by STEADYAKU47 at Friday, April 19, 2013