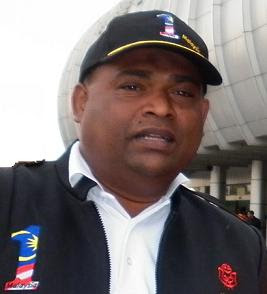 Tabung Haji, in a statement issued here Monday, believed that the board would achieved greater heights under Abdul Azeez's chairmanship.

Abdul Azeez, who has been a member of the Tabung Haji Board of Directors since 2011, is the executive chairman of the Baling People's Development Foundation and a member of the Umno supreme council.

He is also responsible for the setting up of the 1Malaysia Putera Club and known for his voluntary works and humanitarian activities, including in helping the Palestinians in Gaza.


steadyaku47 comment: This Azeez is the same Azeez who as as President of 1 Malaysia Putera Club used Noramfaizul's expertise as a Cameraman to further his own political agenda by taking Noramfaizul to Somalia so that he could have coverage of his so called humanitarian aid trip there - unfortunately it resulted in the untimely and unnecessary death of Noramfaizul! And now he is Chairman of Tabung Haji? Huh! 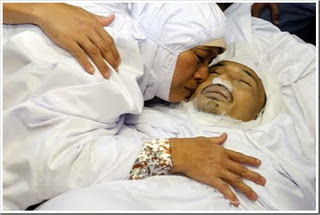 MALACCA: Noramfaizul Mohd Nor, the BernamaTV cameraman killed in Somalia last month, will be the first recipient of the state award for bravery, the Bintang Gagah Perkasa in conjunction with the 73rd birthday of Yang Dipertua Negeri Tun Mohd Khalil Yaakob tomorrow. The award was created in 1978.

First my apologies to the family of Noramfaizul Mohd Nor. I mean no disrespect to him or to his family….but I would like to ask the Malacca state government this : How are the recipient of this Bintang Gagah Perkasa chosen? I presume it would be for bravery. Now tell me when did Noramfaizul showed any bravery?

When he joined Bernama? No he did not.

When he chose to accompany Putera 1Malaysia Club to Somalia? No he did not.

Did he show any bravery from the time he was hit by sniper fire to the time of his death? I do not think he had time to do so.

So pray tell me when did Noramfaizul showed any bravery to deserve this Bintang Gagah Perkasa?

This award is an insult to Noramfaizul because all it does is to glorify his death as an act of bravery when his death was in fact totally unnecessary.

No it does not make Noramfaizul into a hero nor must we allow this occasion to overshadow the need for 1Malaysia Putera Club to take full responsibility for what happened!

The truth is simply this: Noramfaizul died for no other reason then the fact that an irresponsible and self serving so called aid agency in the form of 1Malaysia Putera Club wanted to use Noramfaizul's expertise as a cameraman to further the political career of its president  Abdul Azeez Abdul Rahim.Full stop!


Azeez if you are prepared to take praise as it come after your return from that Gaza trip (see video below) ...then also take responsibility for what you do


In closing I once again ask for forgiveness from the family of Noramfaizul if by the posting of this article I have somehow over shadowed any memories he has left behind of his life. Maaf.