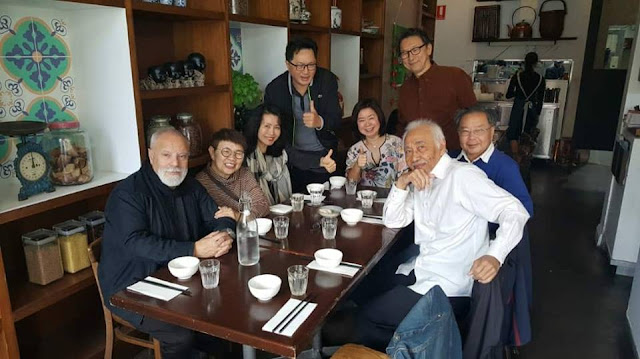 The only thing that has never left my memory from the only time I was in Taiping was the beautiful and serene Taiping Lake Gardens.....and this was before Najib was even a glimmer in my eyes. If my memory serves me right, Najib then was not even circumcised yet! This week, for the second time in his life.Najib was circumcised to a inch of whatever is left of his life ...and here I was celebrating that occasion with the highest number of Guys from Taiping that I had ever had the privilege of being with, in Blue Chili, a Malaysian restaurant in Melbourne.

I have never met them before, but at "Hello" we were already comrades in arms who had together fought the good fight against corruption, dedak and arrogance that Umno and Bn had perpetrated upon our beloved Malaysia over 6000 kms away....and like Malaysians everywhere, we wanted to come together and celebrate. That we did yesterday in Fitzroy.

The food and conversation was a blur....but I remember Tun's and Kit Siang's name being mentioned many a times reverently. I remembered we talked about Altantuya...I talked and they listened. I remembered we talked about Sultans and a certain brat that spent RM 1 million at a supermarket.....I talked and they listened....and then they each talked about how elated they were that after so long, they will once again be proud to be Malaysians ....they talked and I listened. In between we poured Chinese tea for each other, passed the Kueh Teow, noodles and Lobak around the table and confirmed that I, amongst them all, have been the longest resident of Australia. But i was not the eldest of the group. That was claimed by another guy from Taiping sitting behind me in the picture above. Maaf...I am not too good at remembering names...but I do not forget friends. 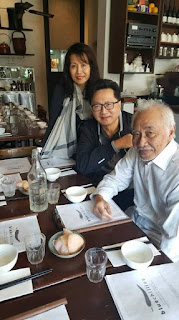 We were all Malaysians. We all love Malaysia. We were all driven away from Malaysia by the politics of race that divides. We have found refuge in Melbourne and like many other Malaysian who now call "abroad" home, our thoughts of our Tanah Air were tinged with much sadness of what could have been for ourselves and our children if things had been different. How different is for each and every of us to decide, but NOT having an Umno led BN in government...the Umno of the recent past...would have been a good place to start.

To soon it was time to depart. I could see, as Malaysian invariably do, the obligatory plastic "taupau"...a Char Kueh Teow I think, that one of the ladies was carrying home. And in the exemplary Malaysian tradition, it was offered to me to take back for my dear wife...but I said thank you but no thank you, for my dear wife no longer can take Char Kueh Teow. After a few more group photographs were taken outside the Restaurant, each and every one of us made our way back to our abode. To all of them I want to say thank you for making an old man feel wanted and happy that all those hours of blogging and Facebook "work" was appreciated.

Email ThisBlogThis!Share to TwitterShare to FacebookShare to Pinterest
Labels: malaysian from taiping.