When I read these quotes I think of Mahathir....how they describe him to a T and how he was too full of himself to know better and to see himself as we see him. 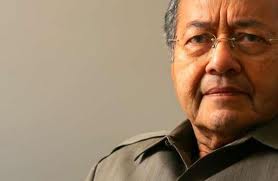 Authority and power are two different things: power is the force by means of which you can oblige others to obey you. Authority is the right to direct and command, to be listened to or obeyed by others. Authority requests power. Power without authority is tyranny.(JACQUES MARITAIN, "The Democratic Charter," Man and the State)
The greater the power, the more dangerous the abuse.(EDMUND BURKE, speech on the Middlesex Elections, 1771)
Power attracts the corruptible. Suspect all who seek it.(FRANK HERBERT, Chapterhouse: Dune)
Nothing unmasks a man like his use of power.(ELBERT HUBBARD, The American Bible)
Power tends to isolate those who hold too much of it. Eventually, they lose touch with reality ... and fall.(FRANK HERBERT, Dune Messiah)
All governments suffer a recurring problem: Power attracts pathological personalities. It is not that power corrupts but that it is magnetic to the corruptible.(FRANK HERBERT, Chapterhouse: Dune)
The spell of power never quite releases its hold.(ISAAC ASIMOV, Second Foundation)
The supreme power tends to fall into the hands of men of the keenest intelligence and the most unscrupulous character.
JAMES FRAZER, The Golden Bough

Fearlessness in those without power is maddening to those who have it.(TOBIAS WOLFF, This Boy's Life)......this must have been so infuriating to Mahathir when he was dealing with DSAI.
If you are to stay in the good graces of the powerful, you had best, however unobtrusively, please the servants of the powerful.(SAMUEL R. DELANY, Neverÿon).....is this not true of those people who had access to Mahathir during his time as PM?