MANDELA TO SPEND CHRISTMAS IN HOSPITAL 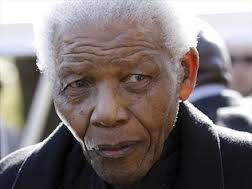 JOHANNESBURG (AFP) - Ailing icon Nelson Mandela will spend Christmas Day in hospital, the South African government said Monday, dashing hopes for a festive end to his longest stay in care since being released from prison in 1990.
"Former president Nelson Mandela will spend Christmas Day in hospital, his doctors have confirmed today, on 24 December 2012," the presidency said in a statement.
The 94-year-old Nobel Peace laureate and South Africa's first black post-apartheid president, was admitted to a Pretoria hospital on December 8. He has been treated there for a recurrent lung infection and had surgery to remove gallstones.
In a statement President Jacob Zuma said his predecessor "continues to respond to treatment".
"Knowledge of the love and support of his people keeps him strong," Zuma said.
"We urge all South Africans to keep Tata (father) uppermost in their thoughts at every place of worship or entertainment tomorrow on Christmas Day, and throughout the festive season.
"We also humbly invite all freedom loving people around the world to pray for him. He is an ardent fighter and will recover from this episode with all our support," Zuma said.
There was no indication of when he might be discharged.
"He remains in hospital, recovering," presidential spokesman Mac Maharaj told AFP on Monday. "I can't say when he will be discharged, doctors will make that decision."
Only limited details of Mandela's condition have been made public by the South African government, which has repeatedly called on the public to respect the former president's privacy.
Before his retirement in 2004 Mandela used to host a Christmas feast in his home village of Qunu for impoverished children -- a highlight for many.
Since retiring from public life, Christmas has been a more low-key affair, spent with family.
Neither tradition will be repeated this year.
While many South Africans have resigned themselves to the idea of life without the country's most respected citizen, he remains highly esteemed and was the subject of many prayers.
On Monday churchgoers at the renowned Regina Mundi Catholic Church in Soweto sent him messages of love and support after mass.
Others, including local celebrities, have taken to social networking sites to wish Madiba -- the clan name he is fondly known by -- a speedy recovery.
"Thinking of Madiba tonight, prayers that he gets well soon just in time for Christmas," wrote radio and television personality Jeannie D.
Mandela, who became South Africa's first black president after the country's first all-race elections in 1994, has a long history of lung problems.
He contracted tuberculosis -- a disease which killed his father -- while in jail as a political prisoner.
The former statesman was later hospitalised for an acute respiratory infection in January 2011, when he was held for two nights.
Mandela was last seen in public in 2010, clad in a scarf during the closing ceremony of the FIFA World Cup, when he was wheeled into the stadium in a golf cart.
In May, footage of a smiling, grey-haired Madiba seated on a couch, was shown on television when he was visited by ruling ANC leaders to present him with a symbolic flame to mark the party's 100 years.
Mandela stepped down in 1999 after serving one term as president.
Posted by STEADYAKU47 at Tuesday, December 25, 2012