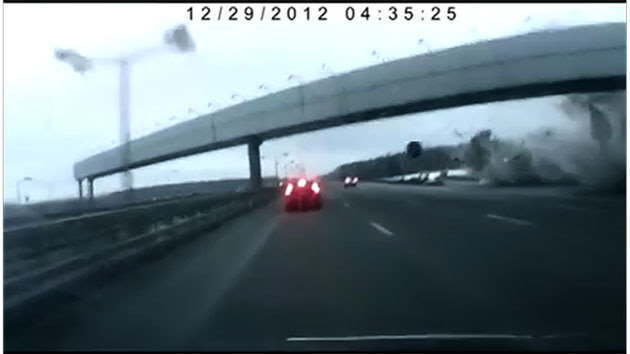 EPA ©Enlarge photo
A passenger airliner has careered off a runway at Russia's third-busiest airport, killing four people.
There were eight to twelve people aboard the Tu-204 belonging to Russian airline Red Wings. The aircraft broke up and burst into flames in the crash on Saturday.
Emergency officials said several people were in critical or serious condition. Interior Ministry spokesman Gennady Bogachev told the state TV news channel Vesti that two people were killed.
Vesti showed photos of the plane's wreckage, with the cockpit clearly sheared off from the fuselage and a large chunk gashed out near the tail.
The crash occurred in light snow, but other details were not immediately known. Initial reports said the plane crashed while landing, but later reports indicated it was trying to take off. 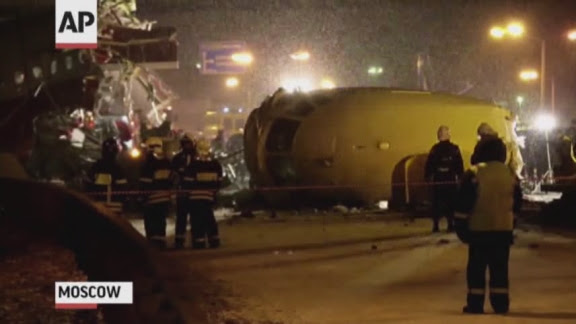 A passenger airliner careered off the runway at Russia's third-busiest airport and partly onto a highway while landing on Saturday, broke into pieces and caught fire, killing at least four people. (Dec. 29)
There had been no previous fatal accidents reported for Tu-204s, which entered commercial service in 1995. The plane is a twin-engine mid-range jet with a capacity of about 210 passengers.
Vnukovo, on the southern outskirts of Moscow, is one of the Russian capital's three international airports. The airport was closed after the crash and flights were rerouted to Moscow's other airports, Sheremetyevo and Domodedovo.
Posted by STEADYAKU47 at Sunday, December 30, 2012