In about two weeks time, as we enter 2013, Najib becomes a Man…or he will have to try and be one! What sort of a man he will become is anybody’s guess. 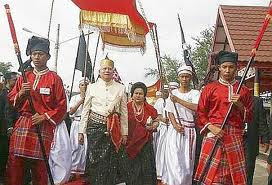 It will be difficult for any of us to try and imagine what other malaputaka (catastrophe) would befall this hapless Prime Minister of ours as he gamely tries to paddle his kayak -  the S.S. Putrajaya -   over Class V rapids on his way to the 13th General Election and oblivion!

Should be survive this Class V rapids he knows what comes next in the first quarter of 2013: Class VI rapids.

He better be adept at doing the “Eskimo Roll” - what paddlers do to roll back upright when flipped….though ideally he should shed some weight before the start of this trip if he does want to try an do that roll!

But tell me friends what can he do with a taskmaster as formidable as FLOM? Just thinking of FLOM sitting across the breakfast table from Najib makes me think of those immortal lines from Shakespeare’s Macbeth “

Is this a dagger which I see before me,
The handle toward my hand? Come, let me clutch thee.
I have thee not, and yet I see thee still.

Anyway I digress….let us go back to that sorry excuse of an overweight (some would say cuddly – a Panda is cuddly- Najib is not a Panda) Prime Minister paddling a kayak in Class V rapids. Let us say that somehow he does get past these Class V rapids and is foolhardy enough to go to the next level where certain death awaits him…..what then?

Altantuya, Razak Baginda, Teoh Beng Hock, Kugan, Aminurasyid, the ghosts of countless deaths in Police custody and do not forget that son of Yasssin all awaits him as he lines up to start an impossible journey. A journey where Najib will come face to face with his worse fear –being left alone up a creek without a paddle!

All his life he has led a charmed life.

Always he has had Tun Razak’s legacy to use as his passport as he stumbled from being the youngest most randy MP ever to being our unworthy, unelected most Queen controlled Prime Minister ever!

Always Najib has avoided taking up the mantle of greatness that Tun Razak left him possibly because he knew he would never be worthy of it.

Always he has chosen the easy path of doing what was best for himself. In this he has perfected the art of questionable compromise to benefit his agenda never that of others.

In about two weeks time, as we enter 2013, Najib becomes a Man…or he will have to try and be one! What sort of a man he will become is anybody’s guess.

A shrivelling, unprincipled coward of a man without the courage to stand up and face Anwar Ibrahim on a level playing field at the 13th general election?

Would he be the man who, as UMNO President, is reduced to appealing to those outside UMNO for a mandate to reform UMNO?

Would he be the man exposed as the ex Minister of Defence whose exploits during his term of office becomes stuff of legends? Massive corruption, abuse of executive privilege and the ‘don’t ask don’t tell’ involvement of all levels within the Army Rank and File to those Civilians from peons to KSU level in Mindef – all involve in corruption of varying degrees!

Or would he be the man who accompanied Rosmah to destinations unknown after the 13th general elections in order to partake of their wealth accumulated during his time in UMNO far from the clutches of our Judiciary?

Whatever happens we know that we will only have to wait a few more months to see how all this will pan out. I cannot help but feel pity for Najib as I would feel pity for an injured Gazelle being stalked by a pride of Lions.

For the Gazele death is certain and our hope is that it would be soon and quick. For Najib there will be no such graces. He chose his own path to where he is now. It is fitting that he reaps what he sows. Amen!
Posted by STEADYAKU47 at Friday, December 21, 2012