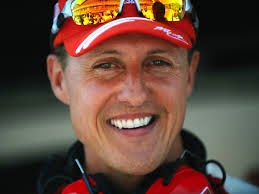 Seven-time Formula One champion Michael Schumacher out of coma

Yahoo7 SportJune 16, 2014, 8:12 pm
The family of seven-time Formula One champion Michael Schumacher says he has come out of a coma and has left hospital in Grenoble.
Schumacher's family said in a statement the 45-year-old was released and will undergo rehabilitation in a private location.
The German, who suffered a serious head injury while skiing in the French Alps in December, was airlifted to a hospital and placed in a medically induced coma after a traumatic brain injury.
Sabine Kehm, Schumacher's manager, said in the statement the retired racer had shown “small, encouraging signs” during the “wake up” phase doctors perform before a patient reaches full consciousness.
The statement also said Schumacher's family believed messages of support helped in his recovery process and that they had offered a thank you.
"Michael has left the CHU Grenoble (hospital) to continue his long phase of rehabilitation. He is not in a coma anymore," Kehm said in a statement.
"We are sure it (the messages of support) helped him. His family would like to explicitly thank all his treating doctors, nurses and therapists in Grenoble as well as the first aiders at the place of the accident, who did an excellent job in those first months.
“For the future we ask for understanding that his further rehabilitation will take place away from the public eye,” it added.

AFP ©Enlarge photo
Formula One champion Michael Schumacher was transferred from a French hospital to a facility in Switzerland after emerging from a coma following his devastating ski accident in December.
In a surprise announcement, the retired German racing star's spokeswoman Sabine Kehm said he had left hospital in the French Alpine city of Grenoble, where he had been treated since December 29 when he slammed his head on a rock while skiing with his son and friends.
However, some medical experts have cast doubt on the announcement, with one saying that 'this is not news'.
Former F1 doctor Gary Hartstein was one of the most outspoken, and said that the announcement was nothing more than what was revealed back in April.
“We’re told, with what appears to be a bit of a triumphal air, that Michael is no longer in a coma. As stated above, THIS IS NOT NEWS. I cannot help but think that this is a highly cynical use of language, using the truth to convey an impression that is almost certainly false,” Dr Harstein wrote on his blog.
“I cannot but think that if Michael had emerged AT ALL from the minimally conscious state that Sabine so accurately described in April, we’d be told that Michael is leaving for rehab, that he is having problems expressing himself and will work hard to get better. Or that he’s having to learn to walk, read, write, etc all over again. But no, we’re told what we already know, and pretty much told to not ever expect further updates.
“This all leaves a very bad taste in my mouth. And a huge space of sadness for Michael’s family, and for you, his fans.”
Another expert, neurosurgeon Andreas Pingel, said that only a quarter of patients who suffer serious brain injuries ever make a full recovery.
“Only between 10 and 30 per cent of these patients have disabilities which are tolerable,” Dr Pingel told Germany’s Focus magazine.
The 45-year-old was transferred to a hospital in the Swiss city of Lausanne where he will be undergoing further treatment, hospital spokesman Darcy Christen told AFP.
Stressing the hospital's commitment to privacy, Christen said Schumacher's family was with him "in a space created especially to ensure their intimacy and to ensure the best possible care."
The Lausanne hospital has renowned neurology experts and Schumacher, his wife Corinna and two children live nearby in the small town of Gland.
Dozens of journalists were parked in front of the facility, but in a country that fiercely respects privacy, the crowd was far smaller than it was in December when news of his accident in the French skiing resort of Meribel attracted throngs of media and fans to the Grenoble hospital.
Current condition unknown
In a statement, the seven-time world champion's spokeswoman Kehm said his family wanted to "thank all his treating doctors, nurses and therapists in Grenoble as well as the first aiders at the place of the accident, who did an excellent job in those first months."
"For the future we ask for understanding that his further rehabilitation will take place away from the public eye," she said.
She gave no further details about Schumacher's condition, which has been kept under a tight lid since his accident.
The racing star underwent two operations to remove life-threatening blood clots after the freak accident that shocked the world, before being plunged into a medically induced coma.
His family announced at the end of January that drugs used to keep him in his deep sleep were being reduced with a view to bringing him back to consciousness.
Since then, Kehm had said he was showing short moments of consciousness, but few other details had filtered out and it is still unclear as to what the future holds for the man who cheated death countless times on the racing tracks.
Doctors say some patients only show signs of improvement several years after their accident. In an April interview with German broadcaster ARD, Kehm said that "a medical prognosis is not possible" due to the nature of his brain injury.
French specialist Bernard Vigue, at the Bicetre Hospital outside Paris, said that he had no information about Schumacher's condition but that "progress is still possible" for patients who had spent six months in an artificial coma after suffering a brain injury.
- 'Red Baron' of Formula One -
News of his transfer to Lausanne was welcomed by Schumacher's close friend Lukas Podolski, the German footballer who is currently in Brazil for the World Cup.
"What a great news Get well soon Schumi I'm so glad and happy when I just heard it!!" he tweeted.
"Keep fighting Michael!!" tweeted driver Nico Rosberg, while Ferrari said on its Twitter feed the news was "encouraging".
Known as the "Red Baron" in reference to an ace World War I German fighter pilot, Schumacher made his debut in 1991 and dominated Formula One not long after.
A ruthless and at times controversial competitor, the German won an unprecedented 91 races, and seven world titles including five in a row with Ferrari from 2000 to 2004.
He first retired aged 37 but was unable to resist the lure of the track. In 2010, he came out of retirement but failed to re-enact his previous performances, and he quit for good in 2012.
Retirement did not dull his relish for adrenaline, however, and he kept pursuing thrill-seeking hobbies as the holder of a pilot's licence, an accomplished motorbike rider, parachutist, skier and mountain climber.
He survived a motorbike accident in Spain in 2009, during which he suffered head and neck injuries but was released from hospital after just five hours -- a far cry from his December skiing crash.
In her statement Monday, Kehm said Schumacher's family wanted "to thank all the people who have sent Michael all the many good wishes".
"We are sure it helped him," she added.
Posted by STEADYAKU47 at Monday, June 16, 2014