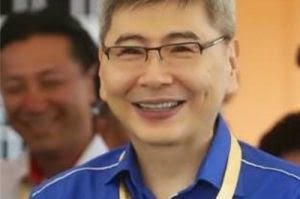 It is early Sunday morning here in Melbourne. My physical self is still fighting the sleepiness of a restful six hours sleep but already my thoughts are of what happened in Teluk Intan last night.

When all is said and done, no matter where you stand politically, you and I know that the people of Teluk Intan did the sensible thing in voting for the Gerakan president Mah Siew Keong.

He is the better candidate who has the means to deliver what he has promised and he has conducted his campaign with grace and with honor. So let us give him his dues.

For those of you who will quibble about the 238 vote majority….. cease and desists … the people of Teluk Intan are as divided as the rest of us in trying to decide what they want for their future and the results reflect their sentiments.

It may be a step backward for those who want change but it augers well for the future of change because BN and PR now understands that to win in any future election, they must have credible candidates who are capable of convincing the electorates that they are better than their opponents. One step backward for PR but certainly two steps forward for common sense - that should be the lesson learnt in Teluk Intan. The better candidate won and the people can be persuaded to vote for the better candidate – be they from BN or PR.

The post mortem by DAP can blame Lim Kit Siang for his choice of youth and beauty over experience and guile.

It can blame RSN Rayner for his “Celaka , celaka, celaka” comments in the Penang State assemble recently – a reminder to all that loose talk does have its consequence.

It can blame DAP for being what the Malays call “Syiok Sendidri”  - that feeling of misplaced confidence and smugness that the hare had over the tortoise in their race to the finished line.

Or you can go down the easy path and insists that the Chinese will vote only for the Chinese…..but if you do you will insult the people of Teluk Intan and Malaysia by saying so!

What is happening in Perkasa, the continuing membership of Dyana’s mother in Perkasa, the stand by ISMA, the manner in which the party elections are conducted in PKR and DAP, that ill thought move in Kajang by PKR, the happenings in Selangor under a PKR government, the abuse and corruption of the BN government…all these
are reflected in the result in Teluk Intan. The wafer thin majority of victory by the BN candidate tells BN and PR what to expect in the coming years as we go towards the 14th General Election. The electorate comes first!

Pakatan Rakat must not harp about the wafer thin majority. They must first ask themselves why 20,157 voted for the BN candidate! Why indeed!

BN too must ask why 19,919 voted for a first time PR candidate who had nothing much more than youth, education, beauty and guts going for her!

Pakatan Rakyat must ask themselves why many thousands go to PR ceramah and only a few hundreds go to BN ceramah and yet their votes go to BN! Why?

The same people who voted DAP in the last election now have voted BN in…simple as that. What changed their mind?

For Dyana and Mah…...It was a honorable fight.

For BN and PR…...it's now back to the drawing board and ensure that in all your future planning, the people and their needs will be the first, last and only consideration that matters.

In the end it was a victory for common sense, a victory for the better candidate and certainly it is a victory for all Malaysian to hope that the future holds more than what our politicians are prepared to concede amongst themselves : and that is....the people of Malaysia will choose their own destiny.
Posted by STEADYAKU47 at Sunday, June 01, 2014