Government Servants : The New Pariahs of Corruption in Malaysia ! 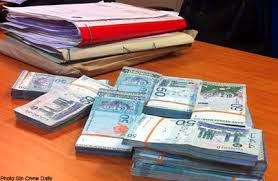 Doctors? How many of you had paid for a medical certificate given with no question asked?

Agensi Antidadah Kebangsaan? Ask those who have been waiting for payments from AADK what they had to do to speed up the process of payment for work already done for the Agency. Ask how the allocation for anti dadah campaigns are disbursed and who you have to “know” to get the work!

Bomba? From buying the fire brigades to tendering out the outfitting of buses used by Bomba for the education of murid murid sekolah and the public about fire fighting – all these process are tainted as contractors and suppliers jack up their prices to cover those within Bomba who wants a piece of the cake for helping the contractors get work from their department.

Driver to Ministers and other important public figures? How do you think information about who their bosses are meeting and where their bosses will be (so that those who wants to ‘campaign’ for any business opportunities can meet with their bosses ”accidently”) are obtained? And who gets a commission from the repairers every time their boss cars needs work done? And some drivers can be relied upon to relay relevant information about their bosses doings, talking and extra marital activities to those who are prepared to pay for that kind of information!

Remember those days when knowing someone in EPU meant that you can always count on having high tea in a 5 star coffee house after work and be sure of a merry Saturday night of free entertainment at the karaoke first and then adjourning to a mess for some “love you long time” sessions paid for by contractors eager to meet anybody from EPU? Hell even the office boy got value - he can help to make sure that your letters do not get lost in transition!

And we the public  know the government servants are corrupt because we have to kautim with them every time we want to approval for things to get done, we need approval while things are being done and again get approval after things are done.

At every step they impose their toll on us without any consideration for the burden they impose on us and the gradual erosion of public confidence in the once respected civil servants!

The taxi drivers who barely earn enough to pay for the hire of the taxi have to pay the traffic policemen everytime he is stopped for any traffic infringement. Do the policemen ever stop to think what contempt and disgust these taxi drivers hold for them?

Government servants are now held in contempt by many many Malaysians….and so many of them are Malays …Muslims who go to Friday prayers, fast through Ramadan and go Mecca with their ill gotton gains!

Yes we have far more public servants than what is needed. We can see them going off for their extended coffee, lunch and tea breaks every time we need to see them. We have to put up with their rudeness and arrogance when dealing with us. From the 1.4 million public servants that we now have this BN government can do without 500,000 of them and still have a lean, mean and efficient government machinery to meet the needs of our people, our government and our nation.

For me these are the new pariahs in Malaysia- even worse than the politicians because their greed affects millions of Malaysian and it burdens the Rakyat everyday in so many ways.

Politicians do need money to campaign and take care of their many supporters and foot soldiers. Some of them gets greedy and put their greed ahead of politics and we know who they are but how many politicians are they? And most of us do not come into contact with them on a daily basis except during election time...and even then they come bearing gifts for the rakyat!

These government servants prey on the most vulnerable of Malaysians - the ordinary folks. We wiat for hours to see them and then they treat us like dirt. And they have become so bold these days that they no longer hide their greed nor their ill gotton gains. How mant times have we been hearing about hundreds of thousands of ringgits – even millions being found in drawers, under the bed and bank accounts of government servants –especially customs, immigrations and PDRM.

Yes they are indeed the new pariahs of our nation.

So please stop hantaming the politicians all the time.

We can vote the politicians out of office but what can we do to these government servants? They are costing our nations billions in salaries and it is almost impossible for them to lose their jobs! They go about seeking bribes from everybody- even the Mak Chik selling goreng pisang from the roadside – nothing escapes their clutches.

We have about 1.4 million government servants.

Of course not all of them are corrupt.

Not all of them can be bribed.

Many of them do their work diligently and are conscous that they are the guardians and custodians of the rakyats against the corruption of the politicians and their collegues. Many public servants are consciotenious and do their work responsibly far and beyond the call of duty. But such is the spread of corruption amongst the government servants that the stench of corruption over powers all other considerations.