The good thing about Britain, Singapore and Australia "I don't have to kowtow to the prime minister before I do deals , I don't have to see them even after I've won the deal."


Crony capitalism in Malaysia has to go, son of YTL founder says 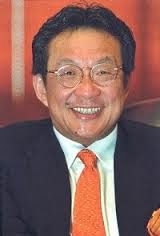 KUALA LUMPUR, June 3 — Malaysia has to free itself from the constraints of “crony capitalism” and stop racial and religious rhetoric in order to compete on the global stage, business tycoon Tan Sri Francis Yeoh said today.

The group managing director at YTL Corporation and eldest son of founder, billionaire Tan Sri Yeoh Tiong Lay said 85 per cent of YTL’s business are in Britain, Singapore and Australia because these countries do not tolerate corruption, practice meritocracy and stand for the rule of law.

“For example in Singapore, we own a third of Singapore’s electricity, there is no subsidy of any kind, there is no cronyism of any type.

“I turn west because of this transparent, coherent regulatory framework,” he said during Pemandu’s Global Malaysia Series at the Securities Commission.

Yeoh said the country’s leaders have to get rid of all racial and religious rhetoric, and focus instead on the economy to improve the lives of Malaysians.

As far as non-Bumiputera small and medium enterprises (SME) go, he said they “absolutely have no chance” to even fight “for the crumbs” as they are already at the low end of the food chain.
“I don’t think you’ll have a chance. Even in Petronas contracts, if (you are) a non-bumi you won’t get to do anything, for example,” he said in response to a question from the audience.

Yeoh said the SMEs would have to rethink their business strategies, be innovative, and use more technology and try to get global exposure.

“Like me, I had to survive so 85 per cent of my business (is) outside, I had to invent a lot of the stuff, for my own self-interest, to make sure I survive.

“I don’t depend on the largesse of the government. I can’t, SMEs more so,” he said.

Despite that, Yeoh said it is up to the prime minister to do away with “crony capitalism” for the future of the country.

“I think this crony capitalism stuff has to go. It’s 20 years old this idea, I think we should replace it with new, fresh, truthful idea.

“Now Malaysia demands a leader in Najib… to really be a Churchill, or be a Tun Razak like his father,” he said.

When asked about how his “close links” with former Prime Minister Tun Dr Mahathir Mohamad had contributed to YTL’s successes, Yeoh denied being the latter’s “crony” and credited the company’s achievements to “innovation”.

“At that time… I think up till today, almost 21 years later, people still think I’m a crony of Mahathir’s.

“People think I’ve got a very fat, lucrative contract from Tenaga, [but] I think it’s about time the truth comes out that we actually were very innovative,” he said.

The 59-year-old said when Dr Mahathir introduced YTL as the first independent power producer (IPP), the then prime minister had already been pushing for privatisation.

Yeoh claimed to have given the idea to Dr Mahathir after the major national blackout in 1992.

“We made profit from day one by this incredible innovation of inventing the bond market, inventing IPC (infrastructure project company) listing, financing it in ringgit that indirectly made Malaysia able to withstand financial crisis,” he said.
Posted by STEADYAKU47 at Wednesday, June 04, 2014