Believe in your Kid! Put money on him!

Enlarge photo
A decade ago, Rory McIlroy was a 15-year-old kid with some skill at golf and a dad who believed in him wholeheartedly.
So much so, in fact, that Gerry McIlroy and three friends put together £400, about $700, on an audacious bet: young Rory would win the Open Championship before he turned 26. The odds? 500-1.
McIlroy is now 25. And he went on to win the British Open by two shots this morning.
That crazy little bet doesn't seem so crazy now, does it? The bet will pay £200,000, or more than $365,000. Assuming each of the four partners threw in equally, that's about $90,000 apiece. Not a bad return on investment, yes?
Here's the BBC's Andrew Cotter confirming the bet:
And in case you're still not convinced:
McIlroy joins an elite list of golfers to have won three of the four major titles, but he had to battle all the way against Sergio Garcia and Rickie Fowler.
He joins legends Tiger Woods and Jack Nicklaus as the only players to have achieved that feat by the time they were 25 and he is the first European to have won three majors.
He also becomes the second most successful British golfer of the modern era behind the six major titles won by Nick Faldo.
The lesson then: parents, bet big on your kids. Sure, their love and gratitude is nice, but so's a six-figure cash payout. 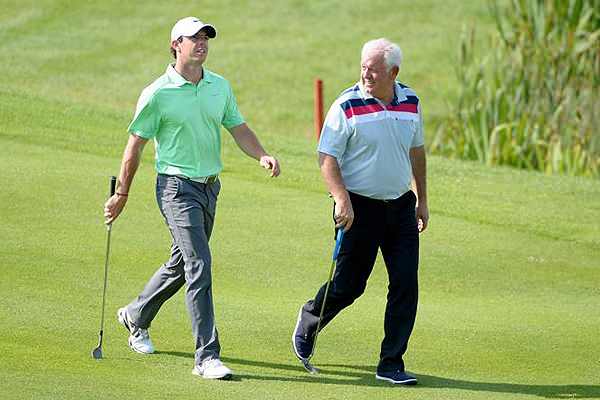 McIlroy and his father. Source: Supplied.
Posted by STEADYAKU47 at Monday, July 21, 2014