The Man who would be King? I think not! 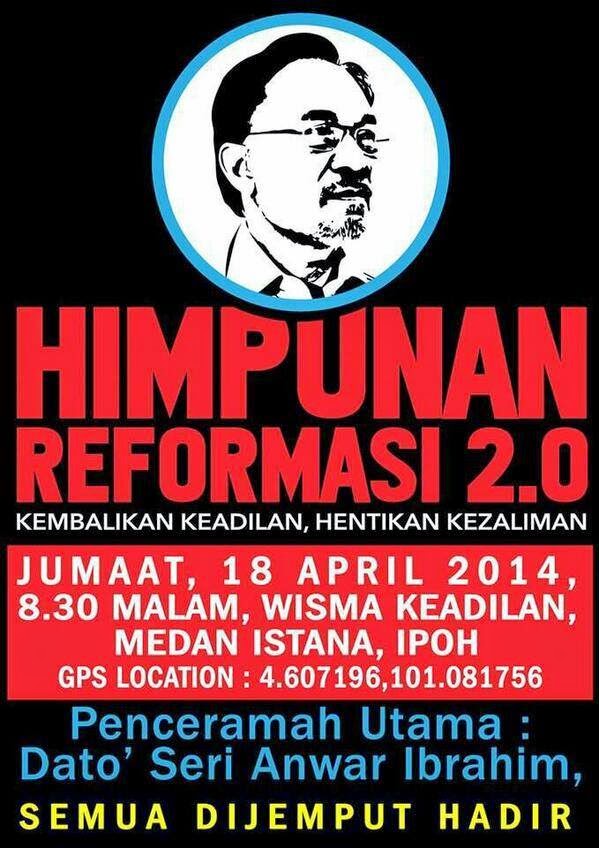 For me there has been a sense of wonderment bordering most times on the incomprehensible for the path that Anwar Ibrahim has chosen to thread from the time that he decided that the very political entity that was responsible for his incarceration while he was a student leader will also be the political entity he would hitch his political fortunes to. Quite like a moth morbidly attracted to a flame...the very flames that will ultimately be the cause of its death!


"Thus hath the candle singd the moath." Shakespeare in The Merchant of Venice, 1596.


How, I asked myself, could Anwar who has stood for everything that the Umno led BN had not - truth, welfare of the poor, needy and downtrodden, the vibrant future that youth promised, the freedom that the common people so craved, democratic principles in government......how did Anwar convinced himself that there is logic in him joining Umno? Were the personal gains on offer from Mahathir for his capitulation to Umno too irresistible for Anwar to ignore? It certainly must have been!

Time, however, has proven to Anwar Ibrahim the folly of his choice to join Umno.

The raw genius of Mahathir in enticing Anwar to Umno cannot be argued but it still needed someone without moral courage to take the bait. Anwar Ibrahim was that someone! That it has not worked out to the ends that Mahathir had anticipated is due more to the fact that Anwar loved himself more than he loved the Rakyat ...or for that matter....anybody else. Anwar became more adept then Mahathir at using that "any means to justify a desired end" principle that Mahathir had already made his own.

The lines between politics and business became blurred as Anwar consistently called upon one to support the other in his madcap helter skelter unbecoming rush to be DPM and eventually, so he thought, be PM.

Even as Anwar publicly professed reverence and respect towards Ghaffar the then DPM, he was deftly, with politics and money, ensuring his own ascension to the number two post. More than anyone else before him and we hope, never again, Anwar Ibrahim used money and politics to promote his own vested political interest.

Anyone else but Mahathir would have succumb to the Anwar Ibrahim tidal wave but in the end guile and the naked use of raw executive political power by Mahathir meant that Anwar was to spend many years incarcerated in Sungai Buloh.


Now he is again doing the same thing to Pakatan Rakyat and PKR is his weapon of choice.


Time, or the lack of it, has forced Anwar to show his hands earlier rather than later. As always, Anwar has no compunction in using anyone and anybody to achieve his own ends. Reformasi, DAP, PAS, Bersih.....PKR, his wife, daughters and friends...many many friends....have been used, abused and discarded just so his personal political agenda are met.


Azizah has been used and abused too many times for the political needs of Anwar Ibrahim, that not only has her credibility been tarnished, but more damaging for her, all the reserves of goodwill and reverence we all once had for a long suffering wife has been used up and is now on empty. In the latest charade we are expected to believe that she is the best person within PKR to be MB of Selangor!


That best person to be MB of Selangor was once Khalid Ibrahim. Like many others Anwar Ibrahim has used Khalid for his needs and now Anwar wants Khalid gone.


How long before he discards Azizah?


And if you think Nurul Izzah is another family member on stand by...think again! If she cannot hold her own family together what good is she to us?


Will Anwar Ibrahim get out of his present predicament?

For sure he will and must! It is the nature of the beast within Anwar to find a way out of anything....even sodomy....but I fear that his "get out of jail" card will be secured at too great a cost to PKR and Pakatan Rakyat. Some would say the loss of Selangor to BN is already a done deal....but more worrying, what will all this mean for Pakatan Rakyat come the next general election? You all will have your thoughts on this....but for me Anwar had done to PKR and PR what he has already done to Umno....make every thing else superfluous to his needs!

superflous : When something is so unnecessary that it could easily be done away with, like a fifth wheel on a car or a fifth person on a double date, call it superfluous .


I will no longer take Anwar Ibrahim for what he wants me to believe him to be....the leader of the opposition, a man prosecuted and persecuted by BN for no other reasons than that he is the most credible threat to BN's political survival and the man who would be Prime Minister of Malaysia! We deserve better!


If you have a shred of decency and common sense in your head, you too would have by now abandon any pretence of accepting this Anwar Ibrahim as leader of the opposition  - what more as a potential PM. Our country have no need of someone like him to be PM or leader of the opposition. He has no business to be in politics, no credibility to be a leader nor has he the decency to understand that loyalties by those who have served Anwar Ibrahim should not be cast aside when it serves Anwar Ibrahim's interest to do so.