God help UMNO...for the Malays certainly will not! 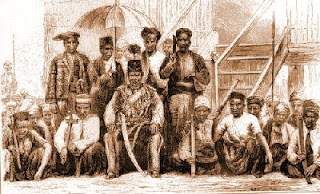 If you are a Malay what would you do if UMNO asks for your vote at the 13th General election? Not even the most optimistic proponents of UMNO will predict certain victory for UMNO. Without the Malay votes they will certainly be no victory. For the first time since it came to power, victory for UMNO is not guaranteed – because by any measure you care to use:


·      Be it respect for UMNO from the Malays.
·      Its inability to eliminate corruption, nepotism or money politics within itself.
·      Or its failure to uphold transparency and accountability in Government:

By any measure you care to use, UMNO is in decline. So what will the Malays do? Will they put race before nation and give UMNO their vote at the 13th General elections because if they do not what relevance has UMNO got left?

I wish it were as simple as that. UMNO told us that if the Malays vote UMNO the Malay race will surge to its place at equity with the others of this beloved country of ours. That if the Malays vote UMNO we will see the Malays political masters of this country  - masters of their destiny – and will take our place amongst the other races as Bumiputra with pride –with pride because affirmative action by UMNO has resulted in the coming into being of a significant urban Malay middle class and the effective eradication of rural poverty amongst the Malays. But none of this has happen! How will UMNO now reinvent itself to be relevant to the Malays?

When Mahathir came to power he took it upon himself to consider the country as his own – as his personal reward on coming into office and immediately lapsed into authoritarianism, which rapidly and inevitably led to corruption.

To many Najib now embodies the party’s further decay.  He came to power by taking it from his President Pak Lah before his President was ready to go. His close confident and advisor Razak Baginda was embroiled in the murder of Altantuya. A murder committed by two of Najibs security detail and involving a considerable sum of commission in a defence contract when Najib was its Minister. A sordid tale of sex, murder, power, corruption, money and greed.

He has also involved himself in the dubious take over of Perak from the opposition and with Saiful who has accused Anwar of sodomy. In both instances it is obvious that our Prime Minister will do what he has to do because the ends justifies the means – and the ends is clinging on to power at all costs.

There are questions about Najib’s commitment to racial reconciliation and questions abound about his competency and judgement to rule – given his tendency to jump into the deep end as his recent offer of RM$5 million to the people of Sibu for their votes indicated recently.

He has no populist following within UMNO and less still among the people. Najib right to govern owed more to his Father lineage then to what he has done himself within UMNO.

In as long as UMNO is the champion for the Malays their righteousness to be the government is unassailable. As long as the Malays are on their side and MCA and MIC are covering their flanks Malaysia is theirs for the taking.

But here the duplicity within UMNO started to unravel. UMNO conjure up the other races as enemies of the Malays and that having MCA and MIC onside was purely to strengthen the Malays in government. A very convenient arrangement where the spoils of war were extended to the leaders of MCA and MIC rather then to the races that they represented.

In the manner they governed BN made millions for many UMNO leaders and their well-connected elites that left the country so much poorer.

We Malays have moved on. We now want political parties that can deliver service – not reward the loyalty of their own members through self-enrichment and autocracy.

Increasingly UMNO’s survival will depend on what MCA and MIC can deliver. Inevitably there will have to a union of equals between UMNO, MCA and MIC  ala Pakatan Rakyat – confirming the old adage that nothing succeeds like success and that imitation is the best form of flattery for Pakatan Rakyat.

And so to the question if the Malays will vote for UMNO when push comes to shove? That question is irrelevant now because UMNO is already no longer relevant to the Malays. God help UMNO for the Malays certainly will not!