Politics is not an exact science. It is the art of the impossible. Do you not wonder sometimes what the outcome of the 13th General Election will be? Or do you consider yourself amongst the growing number of skeptics that resigns themselves to the inevitability of being saddled with bad politicians no matter who wins the election?
Sometimes I despair at the diversity of it all.

And so the battle rages while we stand on the sidelines and watch. Watch and ponder where our country will be after the 13th general elections!

For me I see no glimmer of light shining through any cracks in the amour of BN or PR within which they all hide from us. To both these antagonists what matters is winning because in Malaysian politics the winner takes it all.

Yes I can see great things happening in Penang with Guan Eng there but already money is being made by party cronies. When big business comes into Penang, big money stands to be made. Not that there is anything wrong in that…nothing glaring wrong as yet…but big business has a way of corrupting those who are within their ambit! Politicians included…especially politicians!

Just imagine a Rm1.4 billion welfare program that will help 500,000 people. If only 10% of that 500,000 people are persuaded to thank Najib by voting BN at the next general election – that is 50,000 additional votes for BN. 50,000 additional votes at a costs of RM1.4 billion ringgit is acceptable to a desperate government fighting for its political survival but (it would seem) still concerned enough to uphold the pillars of social justice”….just as long as they are doing the holding up of the pillars of social justice with OUR money!

What it does to a country already in hock right up to its neck is to be debated AFTER the 13th general elections.

The picture opportunity of Najib, Muhyiddin and Sharizat with that one finger salute is collateral “win win” for UMNO that costs the people RM1.4 billion. That headline of NST “FULL OF KARISMA” should really be “FULL OF S#*T” (to quote that Son of Ali). 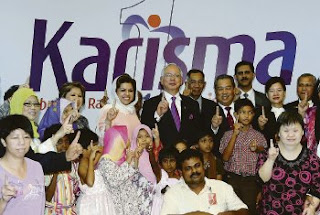 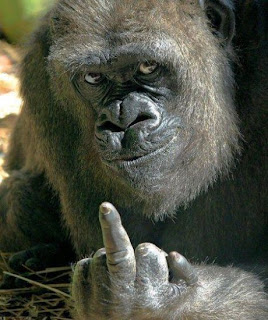 Now that Din guy in the Rumah Ministry had a live bullet sent to him  - which according to KL CID chief is a threat under Section 507 of the Penal Code for criminal intimidation – and this brave Din guy is not at all intimidated about it. It only strengthens his resolve to discharge his duties and responsibilities to maintain the country’s peace and security. Well said Din! I do wish that whoever sent that live bullet to Din will now stop laughing and get a hold of himself. He has had his fun. Din has made all the right noises about “not being intimidated…and national security” and that PDRM CID chief in KL has had his 15-second of fame. Now can we get back to OUR security and maintaining OUR peace?

A quick look through of who Najib is “helping” today is quiet impressive:

Taxi Drivers (our unsung heroes according to NST) gets RM$612,8000 at the Masjid Putra in Putrajaya from Najib & company. According to Najib he knows that these taxi drivers struggle to make ends meet as they earned only RM1,000 a month. Does he knows that half their takings each day are paid out to UMNO cronies that own these Taxi companies? Hell even the uniformed veterans have a Taxi Company that does the same thing! The Taxi companies make the big money – the taxi drivers are not unsung heroes – they are the people who do their daily grind of 12 to 15 hours of work to take home RM1,000 per month while UMNO cronies rake in the big bucks! And were the money distributed to taxi drivers of all races or was it only for the “priceless contributions” of Bumiputra taxi drivers?

And women too! In addressing 5000 women attending the National Women’s Day celebration Najib declared women as significant partners in the country’s transformation plan…explaining that the having of 30 per cent key position in the corporate sector to be held by women is a target, not a quota. Phew! For a moment there those corporate big wigs listening must have almost had a coronary!

And the financial give away continues with RM9.75 million presented to 127 non-governmental organizations to enable them to carry out their programme!

Through all this I can see that all knowing gaze of Rosmah nodding along with what Najib was saying. In as far as she was concerned she had achieved her 30 per cent quota in her household – 30per cent for Najib and 70 per cent for her!

That about covers it all – from taxi drivers to armed veteran and across the gender divide too. A good day at the office for our Prime Minister.

But pray tell me Najib how much more of OUR money are you going to give away for YOUR political survival? There is no such thing as a free lunch….well maybe not for most of us but there seems to be an endless supply of free lunches for Najib to give away….and all these spending will have to be held to account soon…and when subsidies are taken away from essential food items who will have to suffer? The same taxi drivers, army veterans and recipients of the KARISMA program under the Gagasan 1 Malaysia that is suppose to hold up the pillars of Social Justice! What Najib giveth Najib taketh back!

And so the merry go round continues. As our country goes spiraling round and round it gets suck into the vortex and then into the abyss of irresponsible governance by a Barsian Nasional that understands that failure at the 13th general election is not an option to be considered! It is the winning stupid…always the winning that matters. Everything else -  the country, the people, the economy, the poor, the marginalized, the racial divide and all things Malaysians are to used for the greater good of Barisan Nasional.

Now if only there was someone within Pakatan Rakyat that could harness this inherent negativity within Barisan Nasional and use it to explain to the people of Malaysia the need for “CHANGE”…we could then be well on our way towards change for the better. But even within Pakatan Rakyat it is obvious that self-preservation overcomes all other considerations. If only they could seize the moment – carpe diem – and run towards the 13th general election with it, I know that they people will follow.