cakap cakap..In reply to the lament of that Bugis Warrior from another Bugis (me lah...but I am no warrior!).

Following is the lament of our Prime Minister bemoaning the attacks against him and his family. The comments in italics and in blue are my reply to what this cry baby of a Bugis Warrior is lamenting about.

In recent months, various allegations — all unsubstantiated, and many simply outrageous — have been directed against me and my family.

These attacks began when I refused to implement Tun Mahathir’s personal demands. I refused, because I do not believe it is right for Malaysia to be ruled by proxy.

No Sir...not in recent months. From your time as Minister of Defense many questionable decisions were made by you that enriched your cronies. The litany of questionable decision culminated in the murder of Altantuya resulting from your decision to award the purchase of the Scorpene Submarines to financially benefit your close associate, Razak Baginda to the tune of RM500 million. And the unraveling of Altantuya murder is still a work in progress.

In as far as Tun Mahathir is concerned he is a "Jhonny come lately"   - jumping relatively late onto the bandwagon that was already encircling you. Tun is here to deliver the coup de grace after your repeated refusal to answer the many many questions he and the people of Malaysia have wanted you to answer regarding a host of abuses and use of your executive office for the benefit everyone else but the people of Malaysia.

You do not agree that Malaysia should be ruled by proxy? Huh! Who wears the trousers in your own house?

Tun then created a crisis when he recklessly claimed that RM42 billion was missing from 1MDB, when in fact these are audited debts backed by RM51 billion audited assets.
The latest allegation is that I have taken state-linked funds for personal gain. I believe Tun, working hand in glove with foreign nationals, including the now discredited political attack blog Sarawak Report, is behind this latest lie.

Instead of being a cry baby and complaining about Tun, foreign nationals and Sarawak Report alleging you doing a lot of bad things..why not be the warrior you said you were? Why not accept the challenge of having a face to face confrontation with any of them in the public arena to clear your name? You have already said no to Mahathir ...what kind of a warrior are you? Ngak ada telor ka?

Let me be very clear: I have never taken funds for personal gain as alleged by my political opponents — whether from 1MDB, SRC International or other entities, as these companies have confirmed.

Here is the problem Najib....remember that "I help you you help me" incident in Sibu?

"I stand by Robert Lau Jr and no one else. When he stands, he speaks for Sibu and he has my ear as prime minister,"  Najib promises to sign a cheque of RM5 million to resolve flood woes in Rejang Park if BN candidate Robert Lau wins. "Let's make a deal. If you deliver me Robert Lau Jr on Sunday, I will sign the cheque on Monday," he said to a spirited response from the 1,000-odd crowd.

Not only will you take money from 1MDB, SRC International or other entities....if you are prepared to take money from the Rakyat coffers to pay for the election of your candidate (As you did in Perak too!)  what more from others?
It is now clear that false allegations such as these are part of a concerted campaign of political sabotage to topple a democratically elected prime minister.

Yes there is a concerted campaign not of political sabotage but to get rid of you as our Prime Minister...and YOU ARE NOT THE DEMOCRATICALLY ELECTED PRIME MINISTER....remember you lost the popular mandate to govern in the last general election!
At no point have those making these allegations offered any evidence. All we have heard is that these allegations are based on leaked documents and unnamed investigators. Not once has the source of these documents ever been shown, neither have the documents themselves been provided for verification by lawful authorities.

Aisehman you are talking through that part of your body where the sun does not shine! As for "lawful authorities" in Malaysia....are they any left that have not been tainted by political interests? The Judiciary and PDRM included?

As we now know, a number of the documents on which recent allegations have been based were reportedly doctored. The person who was leaking these documents is under investigation by authorities overseas for attempting to extort and blackmail his former employer. This says a lot about the reliability of the documents, and those who are using them to damage our government and our country.

"The person who was leaking these documents is under investigation"...yes he is ...so nothing has been proven or disproved. So why are you already claiming that these documents have been doctored? I am sure the good doctor Mahathir has got a few more "documents " up his sleeves.

Those who continue to mount these attacks should be prepared to face the consequences of their actions. These gutter tactics — in some cases criminal tactics — to overthrow the government will fail. Where appropriate, they will be met with the full force of the law. 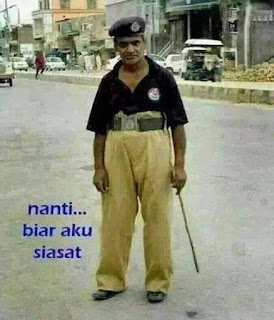 It’s a shame that these false attacks motivated by self-interest come at a time of unique opportunity for Malaysia — with our Chairmanship of Asean this year, and the prize of developed nation status around the corner. I will stay focused on the work of nation building for the people.

You want to focus on the work of nation the building? Huh! You do that Najib and we will focus on getting rid of you! Kapish? And you better be prepared to face the civil and criminal consequences of your own actions too. And how will PDRM apply the full force of the law on us all? Through tweets? Huh!
Posted by STEADYAKU47 at Saturday, July 04, 2015