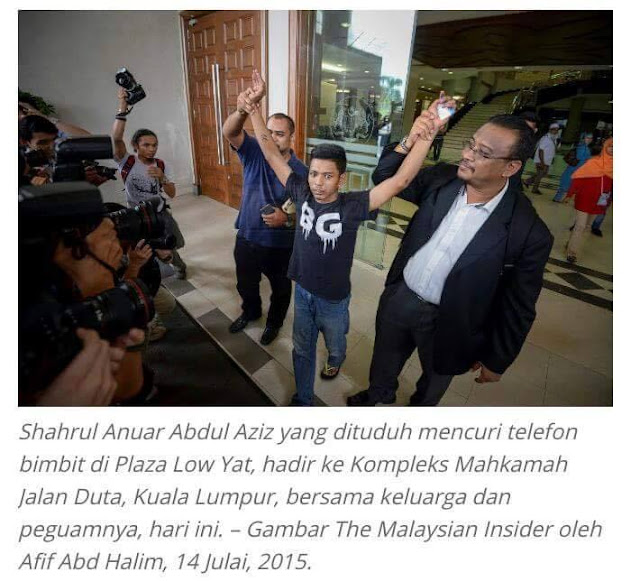 This is the level the Malays have sunk to!

Yes he has yet to be convicted of any crime.

Not for stealing a handphone from a Chinese retailer.

Not for inciting a riot -racial or otherwise!

Not even for impersonating a jaguh kampong....


.....but from what I see of the above image (and yes I have heard of not judging a book by it's cover) ....what I can see is the image of "The Ugly Malays" - two of them...the suspect and his penguam! And here I am using the word "ugly" as a verb and a noun or in any way that is derogatory to the above two!

If there is a case for PDRM to hantam those who are under their custody with a rubber hose or cane them where the sun never shines...the above suspect should be a prime example of one. No need to hantam him as they did to Kugan. No need to shoot him as they did to Aminurasyid....just make this idiot understand that if he takes a wrong turn they will be waiting to put the fear of God into him when they get him alone in his cell again that very night. That would take the smirk of the face of this idiot as he is paraded in front of the press by his penguam...and that would make him not forget that in the end there is karma!

As for his penguam....I am sure if PDRM and Umno dig long and hard enough, they will find something incriminating about him that can be used to make him "understand" not to grandstand the whole issue into a publicity stunt to put himself out there with the likes of the late and great Karpal Singh. One imitation jaguh kampong is enough. One loyar burok is one loyar burok too much!