Whether I live in Bangsar or Melbourne. Whether I am married to a Chinese or a Greek. Whatever my beliefs, whatever the language I prefer to speak or write in, what ever my political inclinations, whatever my thoughts , my aspirations and my hopes. What ever you care to label me as, and however you choose to treat me. All the things that you do to me, call me or even think that I am. Who ever are my friend - Chinese, Indians, Dayaks, Kadazans or Australians ...I am still a Malay. That is who I am and in spite of all things that I do and the options that are at my disposal to live my life by....I am a Malay.

The same goes for the Chinese, the Indians and other Malaysian. Making a Chinese learn Bahasa, asking an Indian child go to a Malay medium school    all these do not make them any less an Indian or any less a Chinese - nor will it make them more a Malay! Asking a Chinese to respect the month of Ramadan, and telling the Indians that they cannot have their temples in Malay areas - these will not in any way make them any more Malay nor will it endear them to the Malays  - they cannot be what they are not.

All these pendatangs that have been "welcomed" by this Umno led BN government into our country because they are Muslims are not Malay.

Now you must remember this.

And this is how we in Australians live our life.

The Australians do not want Malays who live in Australia to be like Australians who think that having a drink or two of the hard kind is as important to their life as Mecca is to the Malays.

Neither do the Australians insists that the Indians who live here in Australia should know who Roy Cazaly (a legendary Australian Football Player famous for his high jumps and ruck work).

But the Malays, the Chinese and the Indians and anybody else who make Australia their home are welcomed to do what the Australians do if that is what they want to do.....but each others diversity is respected, celebrated and given its due acceptance as being a part of Australian culture that has been embraced by all!

That does not mean that there are no racists or bigots in Australia...I can assure you that there are many but they hide amongst the cracks and deep dangy hole of the Australian society and if they do dare to come out in the open it is on pain of being laughed at or set upon by other Australians who despise and hold them in contempt.

Wahai orang orang Melayu....if you want to live as Malays, think as Malays and do what Malays do then go ahead and do so.

Do not attempt to make the others respect your way of life if you do not respect theirs.

Do not ask the others to treat you differently during the Ramadan months if you are not prepared to treat them in the same manner during their time of contemplation and reverence to the Gods that they believe in.

Do not tell them what they can write in their religious books lest they start to question what is in the Koran.

Do not tell them to learn your language if you are not prepared to learn theirs.

And do not tell these people that if they want to live in Malaysia then they must respect the Malays!

Tell me my Malay brothers and sisters ......are you not shamed by the antics of many many Malay politicians and public servants who claim do everything in the Malay name, for the Malay good and shout from the top of PWTC that they are fighting for the Malays against all comers?

Which Malay should the non-Malays respect?

Or should I say which Malay deserved to be respected? If there are no Malays that even we Malays can respect how do you expect the non-Malays to have respect for any one of us?

All that is required to damm and destroy the Malay race has been done and is still being done by Umno and other Malay politicians.

All that Umno has done for the Malays have been taken back from the Malays many times over by the corruption, the arrogance and the irresponsible actions of these Umno Malay politicians now in power in Putrajaya.

Everything you can think of : From spending millions on flowers for a wedding to the arrogance of thinking that they can get away with the hundreds of millions of ringgits, nay even billions of ringgit that they have taken from our nation coffers...all this and more these Malay politicians have done and are still doing today!

All this being done in the name of the Malays!

Cukup lah Melayu! If you want to die a thousand deaths before Umno consign you to the depths of political, financial, racial and communal chaos then do so on your own time - not on Malaysia's or on the time of other Malaysians! They already have their opinion of us Malays and I can tell you that that opinion is not very charitable.

Like many other Malaysian and Malays who have chosen to leave Malaysia for a better life and a better future that the one they found in Malaysia, I have had my fill of Malays who think that Umno's is God's Gift to the Malays!

Umno is a curse that has been put onto the Malay race. A curse which if not got rid off will certainly condemned all us Malays into the same pit of a "Satu Lagi Projek Kerajaan Nasional". 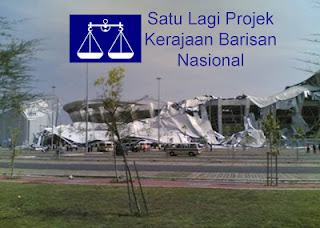