steadyaku47 comment : It is not everyday that a nephew of mine makes the news....here is one instance when one did. Shukri you did the right thing! And in case any other Melayu wants to tangle with Shukri for telling this old Malay lady off for being a dick head I would like to point out to them that Shukri is built like a Tank and is very capable of taking care of himself without any help from anyone! With thanks to GREATER MALAYSIA


A piece by A. S. – Editor at Greater Malaysia


One of our team members here at Greater Malaysia stumbled upon this story where an old lady and her daughter was cutting the queue at the express counter in a supermarket. When this happens, the usual response would either be silence or the people in the queue would tell the queue-cutter off and the matter would be resolved. Not this time.


After being told off, she called the netizen who posted this story “Cina b***…” and the story below ensued. We at Greater Malaysia would hope that one day, things like this will be relics of the past and we can all live without prejudice.

Note: The italicised words in the status update below are comments from the editorial team


Here’s The First Status (With Some Minor Censorship)

See below the photo for the short non-extended status


I told off a 40 plus year old malay lady and her daughter (probably in high school) for trying to cut the queue at the express counter in a supermarket. I said “tolong jangan potong queue. Orang lain pun beratur juga.”

P/S: teruk sangat ke my Malay that she thought I was Chinese?

This was the short version of the story, before he added the extended version below due to overwhelming response.

Here’s The Extended Version Of His Status


Due to overwhelming response, here is the


I was the third person from the cashier with at least 10 people in line and this woman and her kid had been standing in the sidelines talking about how the supermarket should have more cashiers open. I was just observing cos I had a feeling that she was gonna cut the line cos she kept creeping closer to the line. True enough by the time I was the at the counter, she made her move.


I politely said to her:

She gave me a cock stare, took a step back and said those two magical words…

…and I pulled out my IC. (Yes I did. How else was I to prove I wasn’t a b***) Note that the author explains his comments below if you misunderstood his comment about proving he wasn’t a ‘b***’ below.


Then I turned my attention to the people in the queue:

I then told the cashier:


I asked the crowd,

Then they started to sound her. She didn’t know what to do and proceeds to say:

Drops her basket and leaves with her kid. Throughout the whole thing, her kid just kept quiet and kept her head down.


The guy in front of me high-fived me and the queue clapped after me. Abang Shuq dropped the mic and left the building.

Here’s A Note From The Author Of The Status

NOTE: A friend brought to my attention that some have misunderstood when I said “How else was I to prove I wasn’t a b***” when I pulled out my IC to prove I wasn’t Chinese. Its not about race which I’m glad most people understood.


However this does raise a concern. Some of my fellow Chinese Malaysians feel that when the word b*** is mentioned, its referring to the Chinese race. Please don’t feel that way my friends. Its something you shouldn’t associate yourselves with. Only small minded people think this way. I know you’re better than that.


It raises a concern indeed, we are definitely better than that.

P.S following is an example of Shukri's brand of humor...yes he is the guy beside the Mat Salleh. 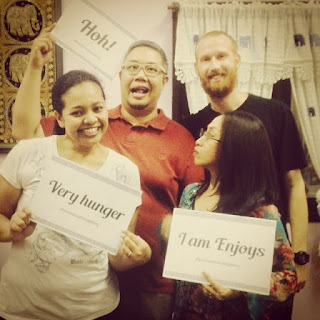