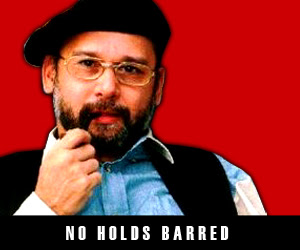 And is this what Nazir is suggesting? If so then je suis Nazir. Let us explain to those who believe in God that there is no evidence that God exists and the many religions that we fight and kill each other over are downright lies and did not come from a non-existent God.

(Malay Mail Online, 26 July 2015) – Datuk Seri Nazir Razak said today that he was not standing up for The Edge in particular when he criticised the suspension of the business papers, but for freedom of expression.

“It’s not for those people,” said Nazir, who is CIMB Group chairman and brother of Prime Minister Datuk Seri Najib Razak, referring to The Edge.

“What am I standing for? Freedom of opinion, freedom of expression, that is all,” he told reporters after attending an Aidilfitri open house organised by former Prime Minister Tun Abdullah Ahmad Badawi.

“I do not agree with what you have to say, but I’ll defend to the death your right to say it,” said Voltaire, the 17th-18th century French Enlightenment writer, historian, and philosopher who was famous for his attacks on the established Catholic Church, and his advocacy of freedom of religion, freedom of expression, and separation of church and state.
I would say, “Je suis Nazir.” It is time that Malaysians understood and accept the meaning of freedom of opinion and freedom of expression. In a civil society there should no longer be any sacred cows that are out of bounds from comment and criticism. We should be free to express our thoughts and views.

I find that Malays are not the only community that takes offense with views that run contra to their beliefs. Chinese, Indians and all the others are just the same. If you say something that contradicts their belief they would take it as a challenge and an insult. You are free to express your view as long as it is not seen as challenging their view.
Whenever I give my view on Christianity the Christians would accuse me of insulting Christianity and would demand to know why am I attacking their religion. Just like the Malays, any view that contradicts their own would be seen as an insult and an attack. And any contradicting view on Islam may even attract a violent and physical response in some countries.

I consider Christianity a lie and I have said so many times. And Christians do not like me saying this. I have explained in the past why I think Christianity is a lie so no need for me to repeat it here. Suffice to say that there is no historical evidence that Jesus existed other than the so-called ‘evidence’ in the Gospels, and even then only in the New Testament.
There were scores of historians around that period who reported all sorts of events of that time but none reported the story of Jesus. And considering, according to the Bible, it was definitely an earth-shattering event, then surely at least one historian would have reported what can be considered a very important event in those days.

However, none of the famous historians mention Jesus although they mention so many other even lesser events of the day. And even those one or two historians who were alleged to have made a passing remark about Jesus have been debunked as fakes and forgeries.
So, if you go by historical records outside the Gospels, Jesus did not exist. And if Jesus did not exist then the Bible and Christianity could not exist as well. Christianity was a fabrication over hundreds of years, created as a political tool and a means to control the population. It did not come from God.

This principle does not only apply to Christianity. It applies to all religions, Islam included. Did the Qur’an really come from God or Allah? Was the Qur’an even Arabic in the first place or was it written in some other language that was ‘Arabised’ over the centuries?

Is the inscription in the Dome of the Rock really ‘Islamic’ or does it actually refer to Jesus? A reinterpretation of the inscription could point to Jesus rather than Muhammad because muhammad with a small ‘m’ would mean Jesus. Read that inscription again with muhammad as an adjective rather than a proper noun and see what you get.
These are views that some people hold. And these views suggest that not only Christianity does not exist but Islam does not as well. But because Islam and Muhammad are sacred cows that attract a violent and physical response, people do not want to bother talking about their views.

However, if we want a society where freedom of opinion and expression are paramount, then it has to be no holds barred. The principle should be, “I do not agree with what you have to say, but I’ll defend to the death your right to say it.”

And is this what Nazir is suggesting? If so then je suis Nazir. Let us explain to those who believe in God that there is no evidence that God exists and the many religions that we fight and kill each other over are downright lies and did not come from a non-existent God.