The shop in Jalan BK 5A/2D, Kinrara Niaga, was shuttered when Malay Mail visited the area yesterday. The outlet in Sepang has been closed since the rape incident. — Picture by Mukhriz Hazim

KUALA LUMPUR, May 16 — How could the police not know that an illegal gambling den was operating just a kilometre away from the district police headquarters in Sepang?
Although the true nature of the so-called cyber cafe was exposed when security camera footage of a woman being raped went viral on social media, residents in the area were surprised police did not know about its illegal activities.
A 30-year-old contractor said he was baffled the police were in the dark about the illegal gambling den, although the shop was just a short distance from their headquarters.
“True, it might not have raised suspicions initially, but wouldn’t police take notice or know of new premises such as this operating in the area?” he said, requesting anonymity.
- See more at: http://www.themalaymailonline.com/malaysia/article/gambling-den-just-1km-from-police-hq-residents-say#sthash.2XRnxHBG.Ojt2rsFT.dpuf

Prostitution - a source of income for PDRM.

15 foreign masseuses held at reflexology centre
JOHOR BARU: Fifteen foreign female masseuses were detained in a raid at a traditional reflexology centre in Jalan Pingai, Taman Pelangi here last week. Of the 15 women, eight of them were believed to be victims of a human trafficking syndicate.  The eight, seven Cambodians and an Indonesian, between the ages of 18 and 20, were believed to have been brought into the country legally under the pretext of securing jobs in factories. The raid was conducted by a team from the Federal Police Anti-Vice, Gaming and Secret Societies (D7) division following a tip-off.

Let me tell this as it is – as it should be told rather then the above media headlines which seems to tell us that PDRM is on top of everything. In this matter what they are on top off is open to conjecture. I want to say here categorically that 90% of these “reflexology centre” in this country are fronts for prostitution. Full stop!

Let us take Jalan Bukit Bintang. The massage centers, SPA, reflexology centers on that street and on the side street running off Jalan Bukit Bintang are centers for prostitution. The Massage Center at the Federal Hotel – a center for prostitution that not only has the vice squad officers on a monthly retainer but also entertains them on a need basis – not their needs but PDRM needs. This massage center is confident enough to have Malay girls on their premises without fear of being raided by PDRM or the religious authorities.

You can see the cars carrying these ladies of the evenings to and fro along these streets delivering them to the various hotels and massage parlors for them to do their “business” and their business is prostitution!  Chinese from China, Cambodians, Thai, Burmese’s, Indons, Russians – for a price they can all be got in Jalan Bukit Bintang.

Stake out the back of Federal Hotel – the road between the Hotel and the Bowling alley – and you see the activities of these pimps with their females. Gone are the days when only Protons were exclusively used (a fact that Mahathir would have approved – the use of Proton I mean!) – but no longer because Proton cars die too soon though you do see them sometimes – but there is no denying the existence of these pimps and their charges – and where are the Police? Where are the Federal Police Anti-Vice and D7 officers?

I am accusing them of complicity  - if not all of them then the majority of them. Of complicity in ensuring that not only do the trade in these females flourish but it also stays beyond the reach of the law and religious authorities. Are you telling me that PDRM is not aware of these activities? That the IPK Selangor situated in the heart of things – in front of the Pudu Jail -  is totally ignorant of this lucrative business in Bukit Bintang?

I tell you that they are in cahoots with the heavenly kings that control this trade. I tell you that the senior officers are receiving monthly retainers to turn a blind eye for amounts of Ringgits that would tempt many of us to want to join PDRM in droves. I tell you that this rot snakes itself from the lowest ranked constable to whoever is needed to ensure that the trade continues to thrive.

So all bases have to be covered and it starts with complicity at the highest level in PDRM.

Where should PDRM start if they want to clean up Bukit Bintang from these activities? Pick any of these establishments. Any one of them and do a stake out in the open. Just place a police patrol car out front or at the back entrance.  Take photos of anyone visiting. That will stop all the customers from frequenting these places. When the customers stops coming – the business closes. The girls have no jobs and they will have to go back to Thailand, Cambodia, Burma, Indonesia – wherever they came from. No worries about them not being able to leave just because they have overstayed. A system already exists between them and Immigration to allow them to leave anytime they want once they have paid what the immigration officers wants to allow them to leave our country without any hassle….see how accommodating immigration can be when there is something in it for them on a personal level!

So Mr. IGP – are you denying that you and your officer turn a blind eye to these activities? The public who frequent Bukit Bintang can see what is happening. The Public does not have to stake out any establishment. They do not have to spend hours investigating what is going on  - it is there in front of their eyes! Is PDRM idea of passive containment for mutual gain?

I am not even going to write about Jalan Chow Kit ! If you cannot manage Bukit Bintang then let us just pretend that the drugs dealing and the flesh trade in Chow Kit does not exists. Let us just pretend that all is good in that part of town. But do not think that we do so because we are heeding your demand that we leave PDRM in peace to do their job.

Why IGP are you telling us to let a sleeping tiger alone? That PDRM is the sleeping tiger? Huh! You stand up and talk your head off about us doing what PDRM wants us to do. You go on and on about PDRM being maligned and bad mouth by the public. Mr IGP Tan Sri Sir you choose to not see what your officers are doing. We cannot because we are at the receiving end of it all. We bear the brunt of your PDRM thugs pushing their weight around in order to line up their pockets. Your constable on the beat have to work hard for their share of our money because after all their officers are getting monthly pay-off of up to $20K to $30K a month in Bukit Bintang alone. And these are not figures I pick out of the air. Go to IPK Selangor and see for yourself what car your officer drives, what car their wives drives – and just for the fun of it – search the pockets of each and everyone in that IPK building and see what you get! 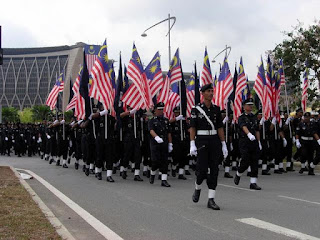