steadyaku47 : Received this comment on the above incident...what say you? 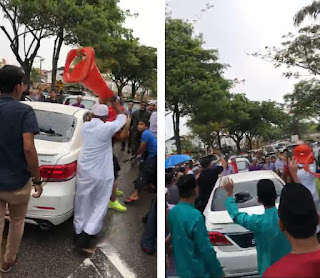 The Taman Austin mosque incident : double/triple parking – it’s Malaysia boleh and something that will never go away. It’s not only Friday mosque prayers because it’s the same for Sunday church services & Buddhists/Hindu temple festivals. Can we expect the enforcement officers, who are virtually 100% Malay Muslims, to ensure traffic rules are followed? I would say at least they are quite fair to the other religions in that no action is taken as well.

What is becoming worse is that in busy commercial areas, the Gen X & Y are also double parking – some to save parking fees and some are simply lazy. They just write down their mobile numbers on the dash boards to be called upon when it is required for them to shift their cars. I would believe that despite the double/triple parking, cars when driven slowly and carefully, can still pass through.

I find that there are a lot of young punks, like that 28 year old Engineer in his Toyota at Taman Austin who are often cocky and impatient and like to throw their “weight” around.

If you ask me, I believe, the culture will continue and if the affected party remains impatient, this kind of incident will continue.