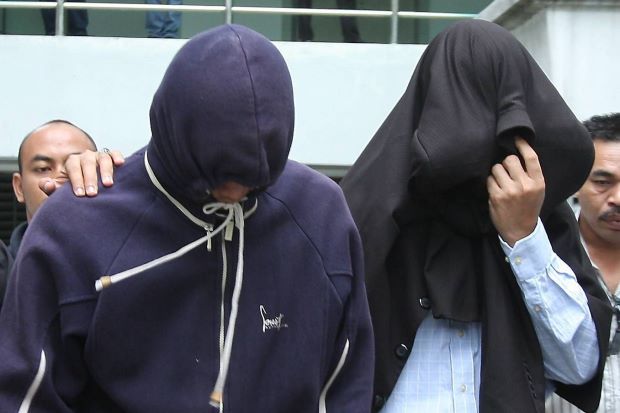 This may be, in all probability, my last posting on Sirul Azhar Umar. This I now know with certainty. Money talks. With a great deal of money, you can drown all other conversation and make yours the only conversation that the one you are talking to, will take note of. All the players in this sad, audacious drama of corruption, sex and murder were, in one way or another, the willing victims of this....none more so then Sirul Azhar Umar who has willingly endured almost ten years of incarceration for a murder he thought was "halal" in the belief that at the end of the rainbow is a pot of ringgit....millions of ringgit.


The question in the minds of many of us is simply this : Who is going to pay him all those millions of ringgit? Who is going to dig deep into their pockets to pay him that amount of ringgit when what he has done cannot cause any prime minister to lose his job, cannot cause the BN government to fall or even allow him to blackmail Razak Baginda or any one else for the money. Sirul has nothing. Zilch. And yet he sits in detention planning for his day of freedom in Australia that he thinks will surely come ...and he will walk out of detention and collect the millions of ringgits waiting for him, to start the life of a millionaire in a country he wants desperately to live in.


And who are the people who are perpetrating this sad audacious lie to SIrul? The very people on whom he has depended upon these last few years while he was in detention in Villawood!


Early in his first year of detention in Villawood, Sirul has access to a smart phone. A smart phone bought illegally from a guard in Villawood with money smuggled in by some one he knows and trusts to take care of his interests. With that smart phone he made the video as scripted by those whom he trusts. With the computer he communicated with the outside world in Malaysia and anywhere else he choose to communicate. And to some of them, he told what he was doing. The videos, the millions promised to him, his dreams of living in Australia with the proceeds of that video and for the price of his silence of "what he knows" ....all a dream that he has now begin to realise is false....for all the video did for him was to tighten the noose around his neck and ensured him that the authorities in Australia will do all that they have to do so that no such thing will happen again


But Sirul is even now living in denial...and easy thing to do when you have all the time in the world to build what ever life you want to build for yourself without the distraction of reality. Sirul can dream anything for himself for there is no one to tell him that his dreams are false.  No one!


When Sirul wanted to talk to Tun Mahathir. He could. He did not listen to what Mahathir told him - that he must have the courage to tell the truth. In his mind he thought himself important enough to be able to talk to Tun Mahathir when he wants to! He only knew that he could talk to Tun Dr Mahathir - an ex prime minister of Malaysia. Sirul has many others trying to see him. Pandering to his every wish for their own ends - not his. How powerful he must have felt he was when he had reporters in Malaysia hanging on to his every word. The world knew of what he has done. He was, at many a times in the past, the man of the moment.


"Was" the man of the moment is right!

Today he is no more than a sad frustrated detainee with no prospect of freedom in Villawood. A detainee who thinks that millions are still coming his way...but sadly a detainee who is increasingly being isolated from reality and from any one else that could make him see the errors of his ways.

And so he lives his days in Villawood doing his prayers without fail. And I am sure, after doing his prayers, he will ask Allah for guidance and strength to endure his present incarceration in Villawood. He will also ask ALLAH to grant his dues....the millions promised to him by unscrupulous nitzens who should know better. The dream to be reunited again with his son and daughter...and I am sure....marriage again and live a life that we all live : in freedom and a rolling in the money. Well Sirul, dream on!


And all this he is doing without a thought for what he has done to the family of Altantuya : He is too busy thinking of himself and for himself, that the "halal" deed he had done no longer bothers him.


So what will I do now with Sirul?

I will wait another year for him to rot in Villawood and maybe come to his senses that he cannot have his cake and eat it too. Australians do not want him to be allowed into their community - and any Australian government that allows that to happen will have a black mark against them when it comes to the next general election....and given the ease with which government change in Australia....no government will want to have Sirul's case burdening their political fortunes.

So I will wait another year...and if I am well then, maybe try to see him again in Villawood and talk about what might have been if only he had the sense to understand that life was never meant to be easy....and millions are made not by making a video that clears Najib Razak of a crime that he did not commit ! Until then....Hasta La Vista!

As for those who are suppose to be looking after his interest...I have only this to say. There are still stories to be told ....and I will tell them when the time is right.