On 14 August 2008, Sabah "businessman" Michael Chia Tien Foh was arrested at Hong Kong International Airport by the HK Independent Commission Against Corruption (ICAC). He was caught red-handed trying to smuggle about RM40 million in Singapore Dollars equivalent, out of HK.

Michael Chia had claimed that the money was for Sabah Chief Minister, Musa Aman. 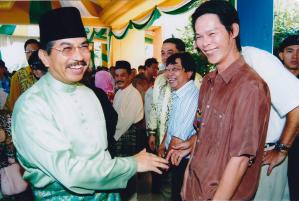 Soon, Musa Aman released a carefully worded statement that he had "no business association whatsoever with an individual name Michael Chia". But then, no one had asked that question. Is it necessary for someone to be your business associate for you to receive corrupt money from a runner or bagman? In any event, corruption is not a "business", is it? Musa was soon proven to have lied!

When later the HK ICAC officers went to investigate over RM360 million (US$90 million) that had flowed through an elaborate system of off-shore bank accounts from Switzerland and Hong Kong to Musa Aman nominee's off-shore bank  off-shore, they got nowhere.

Then three years later, AG Gani Patail, who is related to Musa, and our own MACC claimed there was no corruption case for Musa Aman to answer, and dropped (NFA) it. CLICK HERE.

Because PM Najib and also de-facto Law Minister Nazri claimed that the money was not for Musa Aman's personal use, or Sabah Foundation (Yayasan Sabah), but donations for UMNO Sabah!

This is despite the truth that none of this money ever found its way to Sabah Foundation or UMNO Sabah's bank accounts! In fact, Sarawak Report had unearthed and published irrefutable documents that the money had been drawn upon by Musa Aman and his children!

Despite MACC confiscating tons of documents that at least US90 million constituted kickbacks given to Musa Aman by some of Sabah's leading timber tycoons, they dropped the case, claiming no corruption was involved. The dirty corruption and money-laundering had also been exposed by Sarawak Report. CLICK HERE and HERE.

Neither Najib nor Nazri ever revealed who these generous "donors" were, who found it necessary to "donate" money by a twisted international money-laundering set-up. 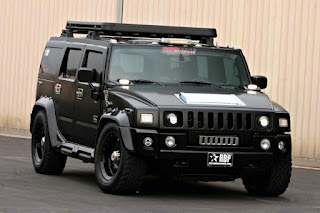 But that's not the end of the story. Not quiet. When Nazri was accused of corruption because "businessman" Michael Chia had made available a RM500,000 Hummer 2 SUV for his son Nedim's use, his reply was, "That is between my son and Chia. What has that got to do with me?" CLICK HERE and HERE.

Do you wonder how serial liar and 1MDB RM46 billion defrauder, looter and plunderer Najib ever came up with that whopper that the RM2.6 billion that ended up in his personal bank account, was from a "Arab Royal donor"???? 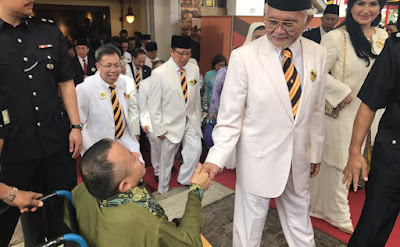 How could Taib be worth RM60 billion (US$15 billion)? CLICK HERE.

Again kickbacks from timber tycoons have contributed substantially. Much of this corruption scandal has been exposed by the Swiss Bruno Manser Fonds (BMS) and a blockbuster book 'Money Logging: on The Trail of the Asian Timber Mafia' by its Executive Director, Lukas Straumann. CLICK HERE and HERE.

In September 2017, BMS filed a case against three Canadian banks for information regarding US$200 million loans they made to Canadian Sakto Corporation, which just happens to be owned by Taib's daughter, Jamilah Taib Murray! CLICK HERE.

Chief Ministers like Musa Aman and Taib, (and their wives and young children), could not remotely have accumulated such fabulous except through massive corruption, which in turn must implicate Najib and UMNO/BN, neck-deep!

I can see you shaking your heads.

Does it make your blood boil that you are struggling to make ends meet, while others rob, defraud, con, pillage and plunder to corruptly accumulate billions of ringgit at YOUR expense?

Struggling to save money for your children's university education, to buy your only house or contribute to your old-age pension fund? Struggling just to have a decent life with no frills, no overseas holidays or luxuries?

Then do something about it!

Make sure you do not vote for politicians like Musa or Taib or any from UMNO/BN at the next General Election. Vote the crooks, thieves, looters, plunderers and murderers, OUT, OUT, OUT!!!

That is the duty of every true patriot who wants what is fair for everyone, and for the national wealth to be shared equitably among all the Rakyat!
Posted by Donplaypuks® at 09:23