Kepala bapak engkau Najib...you can fool those umno idiots but you cannot fool us! 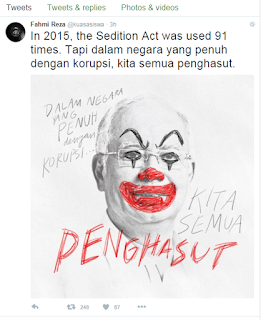 If my memory serves me right, it was this Najib idiot who told Trump "We intend to increase the number of Boeing planes to be purchased by MAS. We are committed to twenty five planes of the 737 MAX 10 plus eight 787 Dreamliners and there is a strong probability, not possibility, probability, that we will add, another twenty five 737 MAX 10 in the near future. So within five years the deal will be worth beyond ten billion dollars. We will also try to persuade AIR ASIA to purchase GE engines"

On top of that Najib says he will try to persuade Air Asia to buy GE engines. Najib is not only licking Trump"s behind he is also offering his backside to be f@@ked by the Americans....and in the video below he is telling those Umno idiots that Malaysia is so advanced now that America is begging Malaysia to buy American goods. Kepala bapak engkau Najib...you can fool those umno idiots but you cannot fool us!