Noor Rashid nak tangkap Isa? Isa already got Najib by his balls....dont play play with him!

Let us take this in perspective....This Noor Rashid is going to call up Isa to question him about the RM200m Felda land transfer....the transfer of Felda RM200m property that has not brought a single cent to Felda.

Kenapa Noor? Kenapa nak soal si Isa tu? Is it because the public is watching and asking what PDRM is going to do about the land deal...so you feel that you must do something to pertahankan nama baik PDRM?

First thing first. There is no more "nama baik PDRM" to pertahankan.To me and many many Malaysians, PDRM is a joke. A sad, sad joke. The joke is not on you but on the Malaysian people because we have to put up with a Police Force that can legally harass, intimidate, remand, arrest and even kill us! So really as far as the rakyat is concern, whether you arrest Isa or you don't arrest Isa, we really don't give a f**k.

Ok...now we talk about Isa. Come on lah Noor you and I know that Isa will not dare to do anything unless he gets the OK from Seri Perdana (notice I said Seri Perdana and not Prime Minister Office....kenapa?....tau same tau aja lah! Bukan Najib aja duk kat situ...nudge nudge wink wink). This Isa may be short, he may be ugly and he may be very very greedy...but he knows that it was somebody who lives in Seri Perdana who put him in Felda. So if that someone tells him to transfer Felda's land gratis to this guy... 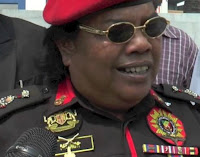 Isa will do so! So please Noor, don't make a fool of yourself and remand that Isa feller....waste of your time and only serves PDRM to be laughed at again when Isa is release from the lock up.

So what is PDRM to do? Obviously there is fraud involved in the transfer of Felda's. Don't talk about Felda not being paid for the sale of the land.....Why should the "buyer" put himself in double jeopardy? First he/she is involve in a fraud in the "purchase" of the land and if he/she pays for the land, he/she will be creating another criminal act because he/she is bribing those in Felda who are involve in the fraud. And Noor Najib and his cohorts will have you and PDRM running around in circle and in the end....the AG will come in and proclaim "There is no intent by Isa to defraud, cheat or swindle Felda". Case close and stamped NFA.

Nor take a lesson from what us happening to the KP of MACC...even with all the video evidence ecetera ecetera...he is still there because he has Najib by the balls because of what he knows about the misdeeds Najib has done in the name of government. Now in Isa's case...it is Isa who has got Najib by the balls....so how?

Swallow your pride (if you got any pride)....turn around and walk away with your tail in-between your legs. Take long leave and then retire and just hope that Felda wants to  start a security company....maybe they can do with your expertise and you can do with some pocket money to help pay for a more relaxing and luxerious retirement. Can?