Is Anwar Ibrahim a corrupt man? 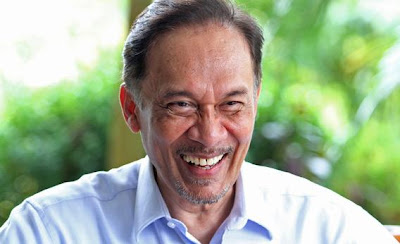 Is Anwar Ibrahim a corrupt man? Has he gained financially from his position as DPM while in UMNO and in his position as the Economic Advisor to PKR in Selangor? Did those who were working for him or with him profited too by their association with him? There will be many amongst you that have already made up your mind on this matter based on information that you access on the net and in the media. Goggle Anwar Ibrahim and you will find 3.5 million references about him -  enough reading to do until the early hours of 2020 and you still will not get past a smidgen of what is out there about this man…..not even a drop in the ocean of information available about this man.

So tell me friend what do you know and what have you read about this man? Did what Petra wrote recently  about DSAI during his time as Minister of Finance made you decide that DSAI is corrupt?

If it did then ask yourself this question: How come Mahthir and Najib did not use this ‘evidence’ to nail DSAI to the cross! Why do they need Sodomy One and Two, the Carcosa tapes and all those gutter youtube videos to try to tar and feather DSAI? What Petra claimed DSAI did while in UMNO would have put him away in Sungai Buloh for a while…and yet they were not used by Najib or Mahathir! Is what that is in Petra’s possession kosher? Think of it, a retired ex ACA operative flies off to London or Manchester (wherever it was that he met with Petra) at whose expense? Not Petra for sure! At his own expense? Huh for sure NO! So who pays for that trip plus expenses and pocket money. Who? Vested interest possibly…very generous vested interest for sure! But for what desired purpose? For UMNO or does he have an axe to grind against DSAI personally?

In short we can speculate and ruminate till the cows come home and we will never come close to the truth. Leave Petra out of this because he is just the ‘alat’ used to get the story out to us – a good ‘alat’ and possibly a believable ‘alat’ but nevertheless he is being used by others to get this story out to us. And so where does this all end?

It will end after the 13th general elections and not a moment sooner. If BN wins they will have no interest in following through on what DSAI did when he was with UMNO. If Pakatan Rakyat wins then PR too will not have any interest in following through on the story!  So for what reason is Petra being so mischevious with this story about DSAI that happened over 15 years ago?

Anwar knows this too well! He treats these exposures with as much interest and as he would have every time he boards a plane to go overseas yet again, and again and again! Yawn!!!!!

It is what we do with it that gives these stories a life of their own. We talk about it with the aplomb of an expert about someone we most probably have never even met!. We give our comments unsolicited to anybody within earshot. We tell them our take on the latest DSAI’s stories while embellishing those part which WE want to highlight to confirm our contention that he is corrupt or not  -  depending on where you stand on this issue! And then we publish out comments like the experts that we are on the coming and goings of DSAI! And this is how these stories take on a life of their own….

Take this sms that I receive a few days back:

“my group  & I were already set to move w pm. If u r ere now in KL u can literally feel d GE13 momentum is goin pms way! W or w/out bloggers, a ‘simple majority’ is in ‘hand’! He is goin 4 june polls! How do I kno this? Simply bcos people in my group r also is advisors!

Now if I “melatah” and took that as gospel coming from the PM’s own advisors – where will it take me? Down the same path as those other people who are used by others to serve their own agenda? So please ladies and gentlemen chill! Take yourself out of the loop and stop thinking what others want you to think.

For those of you that see DSAI as one who can do no wrong I want to confirm with you guys that the last time I checked on DSAI he is as fallible as anyone of us.  He makes mistakes like anyone of us will do from time to time and he certainly has vested interests in making sure that Pakatan Rakyat will come into the 13th general election ready and willing to give BN a run for their money! So what he does today is towards making that a reality.  His interest is in reaching out to the electorate with his message that he is for clean, accountable and responsible government! That and getting the voters to vote for him!

Najib on the other hand is too engrossed in turning himself into a Jack of All Trade and is unfortunately Master of none! He actually sits and listens to advisors who tell him that they can transform his image into what the Rakyat will want him to be! He is Mr Cool, Mr Innovation, Mr Transformation, he is for 1 Malaysia, he is for Ketuanan Melayu.  Everything you want him to do, Najib will do! Well almost anything….I want him to F@*k Off but he will not!
So do not ask if DSAI is corrupt unless you are prepared to ask the same question of Mahathir, Najib, Pak Lah, Muhyiddin, Sharizat, Isa Samad, Tengku Razali, Kadir Sheikh Fadil…and of every damm UMNO and Barisan Nasional politician that has ever held public office. From East Malaysia or West Malaysis. Every one of them are tainted because that is the culture within their brand of politics in Malaysia. Monkey see monkey do!