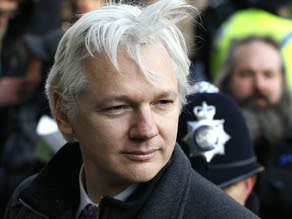 WikiLeaks chief Julian Assange has turned to leftist Ecuador for political asylum, claiming Australia won't protect him from extradition to the United States where he could face the death penalty.


Assange walked into Ecuador's embassy in London overnight and asked for asylum under the United Nations Human Rights Declaration.
The move comes less than a week after Britain's Supreme Court rejected the 40-year-old Australian's bid to reopen his extradition case.
Assange is wanted for questioning in Sweden after two women accused him of sexual misconduct during a visit to the country in mid-2010.
He said in a statement he was grateful to the Ecuadorian ambassador and the government of Ecuador for considering his application.
Assange's mother says she desperately hopes Ecuador will decide to protect her son.
If it does not, she says other third-world governments who've been affected by US greed and corruption must come forward to offer protection.
"When I heard about it this morning I thought good on you mate," Ms Assange told AAP on Wednesday.
"It shows a level of clear thinking given there are absolutely no proper legal processes in this case."
Ecuador's foreign minister Ricardo Patino told a news conference that Assange had written to leftist President Rafael Correa saying he was being persecuted and seeking asylum.
He said that Assange had argued "the authorities in his country will not defend his minimum guarantees in front of any government or ignore the obligation to protect a politically persecuted citizen".
He said it was impossible for him to return to his homeland because it would not protect him from being extradited to "a foreign country that applies the death penalty for the crime of espionage and sedition".
The reference is presumably to the US. Assange claims the US has secretly indicted him for divulging American secrets and will act on the indictment if Sweden succeeds in extraditing him from Britain.
Assange shot to international prominence in 2010 with the release of hundreds of thousands of secret US documents, including a hard-to-watch video that showed US forces gunning down a crowd of Iraqi civilians and journalists whom they had mistaken for insurgents.
Australian authorities have co-operated with the US in investigating WikiLeaks' conduct.
They concluded Assange has broken no Australian law.
Prime Minister Julia Gillard has said Assange has been given the same consular assistance as any other Australian facing legal proceedings overseas.
Her government will ask the US to follow due process if Assange ends up in court, Ms Gillard said in May.
Posted by STEADYAKU47 at Wednesday, June 20, 2012