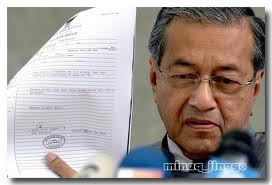 How times have change! Today we have Lim Kit Siang and Nurrul (she is going to be a one name personality – no need for Izzah or daughter of DSAI to tell us who she is!) denying that they want to see Mahathir jailed for his crimes against the Nation. Kit Siang and Nurrul are being polite!

A person found guilty of corruption dies by the firing squad in China.

In some country capital punishment has been abolished and life in prison means just that – LIFE!

The Taliban sentenced women caught dancing at wedding festivities to be shot to death!

In Malaysia corruption makes you rich! PDRM gets away with murder. Having a good time like the Raba Raba Minisiter gets you a much sought after posting to Washington as our Envoy! And UMNO politicians and Chief Justice indulged in sexual high jinks without fear of being shot to death! More often then not they go out and get themselves trophy wife, with or without the permission of their first or other wives!

What shall we do with an errant ex-Prime Minister?

It is not about DSAI seeking revenge for the indignities he suffered under Mahathir – as Nurrul had said. It is not about Kit Siang wanting to jail or not to jail Mahathir. It is about Justice. If you do the crime you do the time! Age, gender, race or religion will not give you a ‘Get out of Jail” pass!

We do not decide though the weight of public opinion will hold sway over the decision that will be made by the courts – but before we let the court decide – the courts must no longer be an instrument of their political masters as they are now of Barisan Nasional.

He can say what he wants:  That he has not done anything illegal, that his family and cronies have not profited from his time in office, that he does not deserve to be tried for corruption, money politics or any other crime. Whether he did or not is for the court to decide – not this court under Barisan Nasional but a court still to convene under a responsible, accountable and open government.

If that court decides that Mahathir should be jailed – so be it. If the court decides that he has no case to answer – so be it. Meantime will Kit Siang, Nurrul or anybody else please refrain from giving their opinions as to what can and cannot be done for this Mahathir. He will get what he deserves – old or not, ex Prime Minister or not, Melayu or not! Until that day you can remember Mahathir in your prayers much like the Jews remembered Hitler in theirs! Amen!
Posted by STEADYAKU47 at Saturday, June 16, 2012