Kuala Lumpur police chief Mohmad Salleh has testified before a government-initiated independent panel on police procedures in handling the Bersih 3.0 rally on April 28.
He told the panel, headed by former police chief Hanif Omar, that the police had been ordered to maintain "maximum restraint". 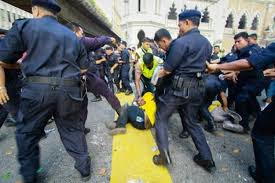 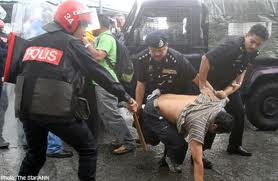 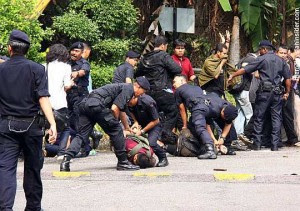 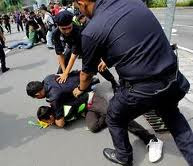 I have the greatest of respect for Tun Haniff Omar. For us MACOBA he is known as the one who cannot lie.I cannot understand his need to be involved in this government initiated independent panel on police procedures in handling the Bersih 3.0 rally unless it is really to get down to finding the truth of what happened. Tun if "maximum restrain" by the police means what we see in the above  images then what happens when that order is not given?

With respect TUN, you do yourself a disservice even by your presence on the panel - what more to head it! About the only thing of value left within PDRM today is you TUN. Do not let us us down by colluding with your political masters and not tell us the truth and nothing but the truth as to what happened at Dataran Merdeka during Bersih 3.0

For now we will give you the benefit of the doubt and trust that we MACOBA were right when we said that Haniff is  'the man who cannot lie." Tabek Tuan!