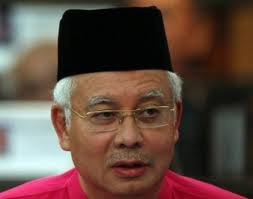 Wikibin The Recycle Bin of Wikipedia!

Malaysia's current Prime Minister, Najib Tun Razak has gone through a number of scandals and crisis since beginning his career in politics in 1976. From incidents such as the 1987 Kampung Baru scandal to his tenure as Defense Minister and finally to his current stint as Prime Minister, there have been calls for his resignation by the Malaysian opposition, Pakatan Rakyat.

1987 Kampung Baru ethnic tension
Following mounting ethnic tensions anti-Chinese sentiments were expressed at a UMNO Youth rally held in Kampung Baru, Kuala Lumpur in 1987. As UMNO Youth Chief, Najib was purported seen threatening to bathe a keris in Chinese blood shortly before the government launched a crackdown on extremist elements termed Operation Lalang. Rising tensions soon lead to fears of ethnic violence and eventually resulted in a security operation known as Operasi Lalang, that included numerous administrative detentions. In spite of his reputation as a Malay nationalist, Najib has made efforts that seem to be intended to reduce ethnic tension. In a speech in April 2009, Najib congratulated the ethnic Chinese for playing an important role in Malaysia's development. In June 2009 Najib overturned a rule that required 30% Malay ownership in corporations, and allowed non-ethnic Malays, like the Chinese and the Indians to exercise more financial control in Malaysia. Najib has also worked to improve relations with Singapore, which is seen by many as Chinese-dominated, to encourage it to invest more heavily in the Malaysian economy.


Eurocopter
Opposition figures pushed for an investigation of Najib's involvement in the procurement of 12 helicopters that they contend was conducting improperly. It is claimed that the Defence Ministry massively overpaid when buying aircraft from Eurocopter for the Royal Malaysian Air Force. On October 14, 2008 Anwar called for an investigation into the Eurocopter deal. Soon after the opposition Pakatan Rakyat Youth lodged a formal complaint against Najib for alleged wrongdoing in the Eurocopter deal. The complaint claimed that Malaysia signed a letter of intent to acquire 12 Eurocopter EC725 Cougar helicopters for the sum of RM2.3 billion while Brazil paid only US$1.2 billion for 50 units of the same model. A Malaysian parliamentary panel, The Public Accounts Committee (PAC), composed of government and opposition lawmakers, investigated


Scorpene Submarines & Sukhoi Fighters
The Malaysian opposition has also accused Najib of involvement in the receipt of large commissions for the purchases of two Scorpene submarines and 18 Sukhoi fighter jets.
The fighter jet deal, worth US$900 million (RM3.2 billion), was through a Russian state company, Federal State Unitary Enterprise 'Rosoboronexport' on May 19, 2003. A company called IMT Defence Sdn. Bhd. was appointed the local agent for the Russian company and received 12 percent of the purchase price, US$108 million (RM380 million). The principal figure and chairman of IMT Defence is Mohamad Adib Adam, the former chief minister of Malacca, the previous Land and Development Minister and a longtime UMNO stalwart. The involvement of IMT Defence only became known because in March 2005, a former director of IMT, Mohamad Zainuri Mohamad Idrus, filed suit against several Adib-related companies, alleging that Adib and his sister, Askiah Adam wanted to prevent him from exposing the Sukhoi deal. In 2006, Mohamad Zainuri lodged a police report alleging that Adib had stolen the US$108 million commission that was supposed to be channeled to the company while Najib was the Defence Minister.


Naval Patrol Boats
PSC-Naval Dockyard was contracted to deliver six patrol boats for the Malaysian Navy in 2004 and complete delivery by April 2008. Those were supposed to be the first of 27 offshore vessels ultimately to cost RM24 billion plus the right to maintain and repair all of the country's naval craft. But only two barely operational patrol boats had been delivered by mid-2006. There were 298 recorded complaints about the two boats, which were also found to have 100 and 383 uncompleted items aboard them respectively. The original RM5.35 billion contract ballooned to RM6.75 billion by January 2007. The auditor also reported that the ministry had paid out RM4.26 billion to PSC up to December 2006 although only RM2.87 billion of work had been done, an overpayment of RM1.39 billion, or 48 percent. In addition, Malaysia's cabinet waived late penalties of RM214 million. Between December 1999, according to the Auditor General, 14 progressive payments amounting to RM943 million despite the fact that the auditor general could find no payment vouchers or relevant documents dealing with the payments. The auditor general attributed the failure to serious financial mismanagement and technical incompetence stemming from the fact that PSC had never built anything but trawlers or police boats before being given the contract by Najib and the Ministry of Defense.


Missing Jet Engines
Two fighter aircraft engines from the Royal Malaysian Air Force went missing in May 2008 and a police report was lodged in August that year during Najib's tenure as Defence Minister in Tun Abdullah Ahmad Badawi's Cabinet. According to Najib there is no cover up on the theft of the jet engines. It was reported that a brigadier-general and 40 other armed forces personnel had been sacked over the incident.
DAP’s Lim Kit Siang on December 22, 2009 called on the government to release a full report to the public on the missing Royal Malaysian Air Force jet engines as it has seriously damaged the Najib administration’s government transformation programme. He stated that Malaysians are entitled to a full, uncensored and unvarnished account of the two missing RM50 million jet engines and why the various authorities seem to be super-slow in their remedial responses.


Perak Crisis
While the Perak crisis reflected a struggle over control at the state level, opposition figures focused on Najib’s alleged role in securing the defections from Pakatan, and demanded new elections in the state. In turn, Najib stated his position that Malaysia’s political system required rule of law to be followed, and that judicial decisions would determine the outcome of the Perak crisis, which should be based on existing laws and regulations.Pakatan Rakyat's lawyers in highlighting their case stated that the ruler, was duty-bound under the Perak Constitution to take advice only from the MB and no other, except when the legislative assembly when it is in session which was not the case at that time. The Sultan at that time acted on the advice of Najib which they said was unconsitutional.


Murder of Mongolian Altantuya Sharibuu
Purported Relationship with Altantuya
Opposition figures have made numerous accusations of Najib Razak's involvement in this matter including bribery of witnesses by figures associated with Najib and the purported romantic relationship of Najib to Altantuya. After opposition figures claimed to have a photo of he and Altantuyaa together Najib swore on the Koran that he had never met herKeadilan party information chief Tian Chua later acknowledged to have faked such a photograph in order to defame Najib


Accusations by Raja Petra
In a statutory declaration in his sedition trial in June 2008, Raja Petra accused Datin Seri Rosmah Mansor, Najib's wife) of being one of three individuals who was present at the crime scene when Altantuya Shaariibuu was murdered on Oct 19, 2006, adding Najib's wife, Rosmah Mansor, and Acting Colonel Aziz Buyong and his wife, Norhayati, Rosmah's purported aide-de-camp, were present at the scene of the murder; Raja further wrote Aziz Buyong whose expertise was giving army housing loans was the individual who placed C4 plastic explosive on Altantuya's body and blew it up.
Shaariibuu Setev, the father of murdered Mongolian woman Altantuya Shaariibuu, has asked the police to conduct a thorough investigation into an allegation by Malaysia Today editor Raja Petra Kamarudin. He said the police should look seriously into the allegation by Raja Petra as it might provide them with fresh evidence. In retaliation, the two people named in Raja Petra Kamarudin’s statutory declaration on June 18, Lt-Col Aziz Buyong and his wife Lt-Col Norhayati Hassan, as having been present at the murder scene of Mongolian Altantuya Shaariibuu are suing the Malaysia Today editor for defamation. Aziz is seeking an apology from Raja Petra to be published in certain websites and newspapers, the removal of the statutory declaration from his blog and damages of RM1 million.
Raja Petra went into hiding in April 2009, nearly a year after he was charged with sedition over an article he wrote that allegedly implied the prime minister and his wife were involved in the murder of the Mongolian woman. Fugitive blogger Raja Petra Kamarudin had alleged that Balasubramaniam had been living in India since he went missing and had been paid to keep quiet.


French Newspaper Liberation
The French newspaper Liberation claimed that Najib Razak had indeed met with Altantuya, who was the mistress of Abdul Razak Baginda, his close aide and associate, in Paris in 2005. It mentioned that a photograph was allegedly taken showing the three in a Paris nightclub. The Liberation also suggested that Abdul Razak had been Najib’s intermediary for arms purchases. In October 2006, the newspaper claims that Altantuya was informed that the commission paid by Armaris, a Spanish company involved in Malaysia’s acquisition of three submarines for one billion euros (RM4.7 billion), had been deposited in a bank account in Malaysia. The commission of 114 million euros was allegedly paid into the account of Perimekar, a company Razak controlled. Altantuya then allegedly flew to Kuala Lumpur to demand her share of the commission, which was to have been US$500,000.


Alleged Destruction of Evidence
After the murder of Altantuya, Datuk Syed Abdul Rahman Alhabshi the honorary consul of Mongolia in Malaysia contacted Shaaribuu Setev, her father. When Datuk Said asked Shaaribuu for all documents, especially pictures, notebooks, films, computer files that could help with the murder investigation, Shaaribuu did not hesitate. He gave Alhabshi everything he had found in his daughter apartment in Ulan Bator. Alhabshi kept the documents for himself, not giving them to the court in Malaysia. “We thought he was working for us, but actually he is working for the Malaysian side”, says Shaaribuu with bitterness. Altantuya’s father then asked the Mongolian foreign ministry to dismiss Datuk Said from his position as an honorary consul. The ministry then summoned the diplomat in Ulan Bator to ask him to explain his behaviour. To justify his attitude, Datuk Said has said to Shaaribuu “Given my high position within Umno, it is not possible for me to oppose Najib Razak”.


Anwar Ibrahim Sodomy Scandal
On 30 June 2008, Najib denied any personal involvement in the alleged conspiracy against former deputy premier . He said the picture of his aide Khairil Anas Yusof with the alleged victim Saiful Bukhari Azlan at his office had been taken three months ago when the latter came to his office to seek a scholarship. However, on 1 July 2008, Najib mentioned that he met Saiful at his residence a few days before Saiful made the police report on Anwar. Najib also said that Saiful sought to meet Najib to reveal that he had been sodomised by Anwar, implying Najib's complicity by the opposition. The blogger Raja Petra contends that a friend had accompanied Saiful to a meeting with Najib before charges against Anwar were made public, implying that the new charges against Anwar had been trumped up.
Posted by STEADYAKU47 at Tuesday, June 19, 2012