Greed In Malaysia And America

Unlike what most of Malaysia thinks, this is old news.

Najib Razak's step-son had bought this apartment at least a year ago. Obviously, like his dear mother, he had saved up all his life and bought it. That family ought to give financial tips on how to save money. 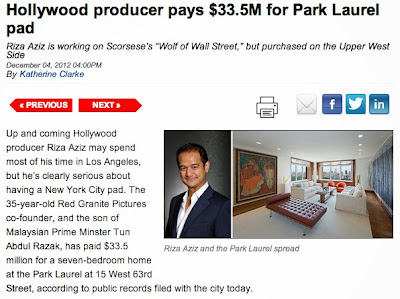 They could certainly give tips on how to spend it.

Interestingly, I suspect the news got out because of the film that was released in the US on Christmas Day. "The Wolf of Wall Street".

Yes, it was produced by Najib's step-son's company.

Interestingly, it bears a striking resemblance to the issue at hand. Of stealing. Of spending money that doesn't belong to you.

Because that is precisely what this movie glorifies, and exactly what the main character in this movie does. Jordan Belfort is his name and his greed and lack of integrity is part of the reason why America was brought down to its knees.

This is a very interesting open letter to the director and main star of the film by Christina, the daughter of one of Jordan Belfort's accomplices/associates named Tom Prousalis.

It is very apt and describes what greed could do to men, be they American or Malaysian.

Read The Sarawak Report for more information on this topic.
Posted by STEADYAKU47 at Sunday, December 29, 2013