cakap cakap...Widuri and my Father. 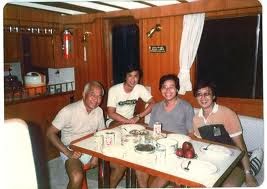 I did not spent as much time as I would have liked with my Father. We have agreed to disagree on too many issues for me to  say that it has been a good run between father and son but having said that I would say that my father was one of those few people for whom I have great reverence for because he was a man of his words - even if his words came from his own perspective and not mine....and that was reason enough for me to do as I would and not as he would have wanted me do.

There was never a question of who was right or who was wrong.....my Father is always right.  If I insists (as I always do) on doing what I want to do, than I will bear the brunt of his displeasure and I will have to find a way back into his good grace...and that might take a day or years....more often than not,  years. I do not know if it was pride or plain stubbornness that made my Father the man he is but he was comfortable with himself and saw no need to change his ways.

His love was the sea and after his wife, my mother left us -his great love was his boat Widuri.

Fishing from Widuri, going on long extended trips on Widuri and tinkering with Widuri...any excuse to get on Widuri! And invariable every weekend he had free will be spent on Widuri.

Where we differ on Widuri is this. My Father's idea of a good time was to take Widuri from Port Kelang to Lumut, Langkawi or even the East Coast and his preferred time to travel was through the night when it was much much cooler especially with the sea breeze blowing in your face. I prefer to spend the weekend with my family on Widuri while it is at anchor at the Selangor Yacht Club....safe, secure and not moving anywhere. This way I can see land and the Selangor Yacht Club is close enough for me to have my favorite fried mee whenever I so desire. I will not say that cruising through the night on Widuri is something I would prefer not to do but I do keep my eyes on the horizon all night to be sure that I will be there to tell my father if anything bigger that Widuri is ahead.

One time we were somewhere in the middle of some ocean (I swear that we could not see land anywhere on the horizon) and the engine suddenly stopped. Without a second thought my father put on his scuba gear and jumped into the sea to check what was wrong with the propellers....and he was followed by Jamal, my brother in law! The least Jamal could have done was to stay on board Widuri so that if my Father needed rescuing HE will jump into the sea to rescue my Father....for I will not jump into waters that is over my head! Anyway they found that the propellers was blocked by some ropes entwined around it - cut the rope off and we continued with our journey.

Notwithstanding all those trials and tribulations (for me!) of navigating by night the times we spend on Widuri with my Father were the happiest and most memorable of our lives  because my Father was happy when he was on Widuri...and when he is happy so were we. I am indeed bless to have known him and have him as my Father.