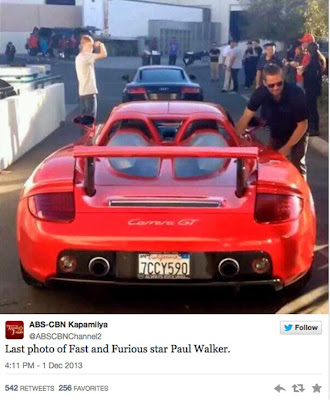 Paul Walker, star of The Fast and the Furious, has died, WHO confirms.

The actor died Saturday afternoon when the Porsche he was travelling in crashed and exploded in Santa Clarita, California. The driver of the vehicle, ex-race car driver and owner of Walker's auto-racing team, Roger Roadas, also died.
Friends and colleagues flooded Twitter with tributes to the father of one, who got his start as a child actor in commercials and went on to make appearances in shows likeCharles in Charge, Who's the Boss and The Young and the Restless.


"My heart is hurting so bad no one can make me believe this is real," his friend and costar Tyrese posted on Instagram.
"Father God I pray that you send clarity over this cause I just don't understand," he continued. "My heart hurts it's broken no one can convince me that this is real.... Prayer warriors please pray real hard for his only child, his daughter and family... #HeartOfAnAngel13YrsFamilyForeverWeJustCelebreatedYour40thBirthday..... My God... My God... I can't believe I'm writing this."
Another of Walker's 'Fast & Furious' co-stars, Ludacris, tweeted: "Your humble spirit was felt from the start, wherever you blessed your presence you always left a mark…"

Walker and Vin Diesel at the premiere of 'Fast & Furious 6' earlier this year. Credit: Getty Images


Police released a statement about the accident: "When they arrived, deputies found the vehicle engulfed in flames. The Los Angeles County Fire Department responded, extinguished the fire and subsequently located two victims inside the vehicle. The victims were pronounced dead at the scene."
Keep up with your favourite celebrities in the pages of WHO Magazine bysubscribing now.
"This is an ongoing investigation," Deputy Heischuber of the Santa Clarita Valley Sheriff's Station tells WHO. "A solo car crash occurred about 3:30 p.m. in the city of Santa Clarita, on the outskirts of Valencia. A 911 call came in from a bystander."
A Tweet from Walker's verified account reads: "It's with a heavy heart that we must confirm Paul Walker passed away today in a tragic car accident."

The scene of the crash that left actor Paul Walker dead. Photo: AP
According to a post on his official Facebook page, the actor was "attending a charity event for his organisation Reach Out Worldwide. He was a passenger in a friend's car, in which both lost their lives. We appreciate your patience as we too are stunned and saddened beyond belief by this news. Thank you for keeping his family and friends in your prayers during this very difficult time. We will do our best to keep you apprised on where to send condolences."
Walker was known for his role as Brian O'Conner in The Fast and the Furious film franchise.
The latest, 'Fast & Furious 7', was filmed this fall and also stars Vin Diesel, Jordana Brewster, Tyrese Gibson, Michelle Rodiguez, Ludacris and Dwayne Johnson, and is scheduled to hit theaters next summer.

Paul Walker in 'Fast & Furious 5'. Photo: Universal Pictures
Walker has a daughter, Meadow Rain, who turned 15 last month.
The actor was born in Glendale, California, in 1973, and appeared on TV in Who's the Boss and The Young and the Restless as a teen before breaking through to films such as 1999's Varsity Blues and She's All That.
Walker recalled his decision to take the role in Fast and the Furious to Motor Trend this year.


"Universal came to me with a newspaper article about street racing in L.A. and I was like 'Are you kidding me? I grew up doing that right off Peoria in Sun Valley,' " he said. "They asked if I wanted to do it. There wasn't even a screenplay, there was nothing, but I was like ...'F–– yeah, I want to do it!' "
TMZ was the first to report the news of Walker's death in a car accident.
PHOTOS: Hollywood's Sexiest Family Guys


Watch the trailer for 'Fast & Furious 6'