Arrested for editing Rosmah's picture but okay to make her look 18 years when she is actually 63...Camna ni?

KUALA LUMPUR: Police have arrested a Facebook user who allegedly uploaded an edited picture of the Prime Minister’s wife Datin Seri Rosmah Mansor.
The picture posted on Facebook was edited to show Rosmah as a dead passenger of Malaysia Airlines Flight MH370.
City police deputy CID chief Asst Comm Khai­ri Ahrasa said a 28-year-old man, who worked in a launderette, was arrested after police raided a house at 12.10am Sunday in Bandar Universiti Seri Iskandar, in Tronoh, Perak.
Police also seized a handphone, a computer and several other gadgets. The suspect has been remanded until March 8.
ACP Khairi said the case was being investigated under Section 505 of the Penal Code and 233(1) of the Multimedia Communications Act.
steadyaku47 comment:
Aiyah why you have to edit picture of Kak Rosmah? I am using the honorific "kak" title because attempts are now being made - even as I write - by the powers that be to have Rosmah to be more 'rakyat friendly' ma!. However there is no truth in the report that another 'big money' New York based public relations firm has been commissioned to do this. These New York street savvy public relation firms are great at what they do but they are not stupid enough to try and do the impossible (and in any body's language trying to bolster Kak Rosmah's image in Malaysia is near to impossible!)....so the job has been delegated to the 4th floor guys of the PM's office...and the first thing they have come up with is that "Kak Rosmah" suggestion...that is why I am trying it out....but does not have a sincere ring to it ma!

And they have come up with numero uno problemo! Her Highness FLOM does not agree with being called "Kak"...First Lady ok,..... Datin Seri ok......even Toh Puan too ok (after all she is confident that Najib will be a Tun soon - just a matter of time) but "kak" is a no no! So back to the drawing board for those 4th floor guys.

But I digress...now back to the story about someone being arrested for editing a picture of Rosmah's on Facebook.......

Can someone tell me who is responsible for editing this picture of Rosmah when she really has aged and look like the pictures below? Or is it okay to photoshop Rosmah's face on the government owned media in Malaysia but not on Facebook? Where got road man! 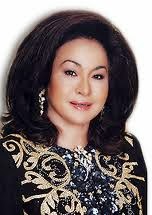 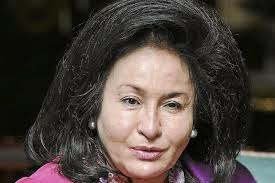 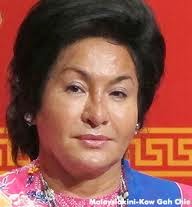 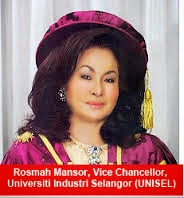 Now I am confused! So many images lah....please  don't blame me...please don't arrest me!