Oh my country what has become of you....Al Fatihah!


CLEANER BASHED TO DEATH FOR TELLING OFF ROWDY GROUP 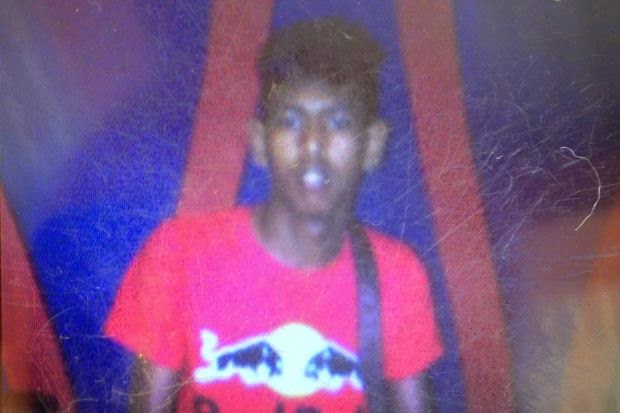 GEORGE TOWN: A group of men beat a teenager to death with crash helmets after he apparently told them to stop drinking and making a nuisance of themselves.
The four men repeatedly bashed Ameer Mustaqim Naharuddin, 19, on the head and face at about 2.40am yesterday at the IJM Promenade in Sungai Pinang, Jelutong.
He died on the spot. His three friends called the police when they found him lying on the ground.
The attackers had already fled the scene on two motorcycles.

steadyaku47 comment:
This is what I woke up to this morning...the first 'news' item I went to when I powered my PC this Friday morning...and my heart was filled with much sadness for the teenager beaten to death....not, this time around, while in the custody of  PDRM ....but by crash helmets wielded by four cowardly thugs...and my thoughts went back to Kugan and the others who have met their death at the hands of the same type of cowards who get their 'courage' when their victims are unable to defend themselves....what has our become of our nation...why are some of our people so callous and lacking in empathy for others? Might is right?
There is something very very wrong with a society that breeds these kind of human beings...human beings like those four thugs that bashed that cleaner to death .....but also a   society in which these kind of happenings are become so familiar that it no longer hogs the headlines of our medias but are relegated to the inside pages...and we no longer see our political leaders becoming outraged at the lack of law and order that has allowed for these kind of crime to be perpetrated on so many of our people....and so many of them are our young and those most vulnerable to these kind of attacks.
Like the state of our politics today, crime has also become something that we all endure with gritted teeth and a stoic acceptance that those in the corridors of power have no concern for the safety of their people and the proliferation of criminality in society because the election is over and their concern now turns to the getting of material wealth...not the safety and well being of the people!
We await the 'no stone unturned' investigations that will surely be promised by our political leaders and let us watch what PDRM will do....after all the one dead is 'only a cleaner!".
My heart is heavy with sadness for that cleaner who is now dead...for he is first a human being, somebody's brother, someone's son......and a young human being with still so much of his life ahead of him...as much as Aminurasyid, Kugan and Teoh Beng Hock....and these thoughts tugs at my heartstrings so very early on a Friday morning...this is not the way to start a Friday....in truth it is not the way to start any day! Oh my country what has become of you....Al Fatihah!
Posted by STEADYAKU47 at Friday, April 11, 2014