Racism in Australia...and how it is handled!

Do not believe anyone who says that there is no racial discrimination in Australia!  There is  racial discrimination here. The following you tube clip shows an Aboriginal player, Adam Goode,  being called "an ape" by a young spectator only 13 years old. What he does next is to point out the girl to security and they escort her out of the stadium immediately.

It is what happens after the game that shows how disgusted Australians are when one of their own are racially discriminated against. We can only hope that one day soon racism in Malaysia will be treated the same way it is treated here in Australia.

All Australian laws (Commonwealth and State) impose some responsibility on schools and individuals, be they teachers or students, to take steps to prevent and combat racism. The Australian laws are aimed at protecting individuals from racism at school and also to protect those individuals who make complaints about racism. Commonwealth and State laws make it unlawful for a person to racially discriminate against another person at school and also make it unlawful to encourage, incite, permit or allow racist acts to occur. For this reason, the Australian laws do impose an obligation on everyone to be vigilant about racism and to take action when incidents of racism occur, particularly where those incidents might be unlawful.

After the game the President of the opposing team went down to the dressing room and apologized to Adam Goode for the racial slur uttered by the girl.

In the coming days after this unfortunate incident public disgust for what the girl did was played out in the media and television and it eventuated in the girl apologizing on camera for making that racial slur on Adam and there was praise all around for the manner in which Adam handled the situation  - with dignity and integrity.

A few months later this was the headline:

Adam Goodes Australian of The Year

Anyone will have to think twice before making a racial slur on any other Australian. If a politician did so...it will be political death for him/her.

Compare this with Hishamuddin waving a Keris and threatening rivers of blood against the Chinese population!

But what Hishamuddin has done will most probably not be repeated again in Malaysia because the Rakyat will no longer tolerate such racial shenanigans again. Slowly but surely these racists are being pushed further into the closet and hopefully we will soon lock that closet door and throw the keys away for there is no place in our society for racists!

And soon the weight of public opinion and the wrath of your peers would be reason enough for any racists to desists from making their views known to anyone else but a few like minded racists.

There will always be racists anywhere we go...but when the people are overwhelmingly against racism it will die a quiet and natural death and be gone.

No more will politicians be tempted to use race to divide and rule our people, no more race profiling for education, job opportunities, government contracts or even crime.....and that time has irreversibly already been set to come as our population become more educated, more knowledgeable and more understanding of the concept of 1Mlaysia as it should be.

All for one and one for all!

And let us have no more of these kind of racism....for not only does it not give respect to the dead but it brings ALLAH down to the level of these Barisan Nasional politicians... 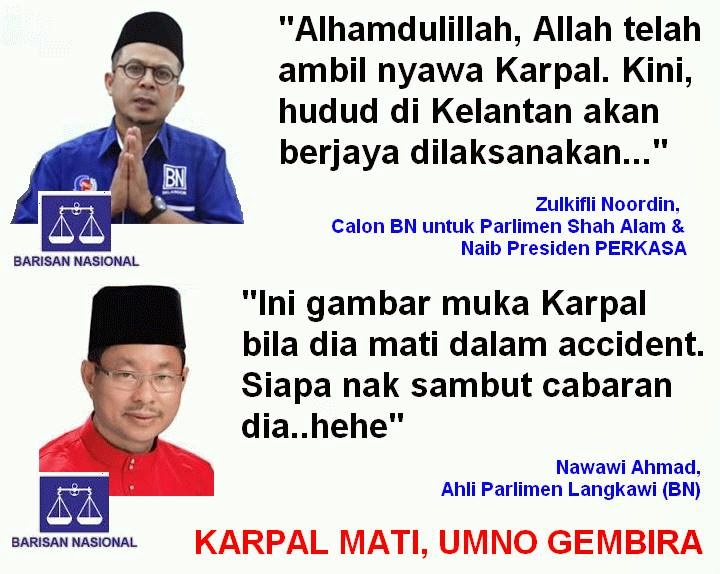