It would seem that even the Gods no longer favors this BN government led by Datuk Seri Najib Tun Razak. Four weeks after MH370 disappeared and nothing has eventuated. Nothing from a search of the South China Sea, nothing from the Straits of Malacca and  nothing yet from the Southern parts of the Indian Oceans off Perth. 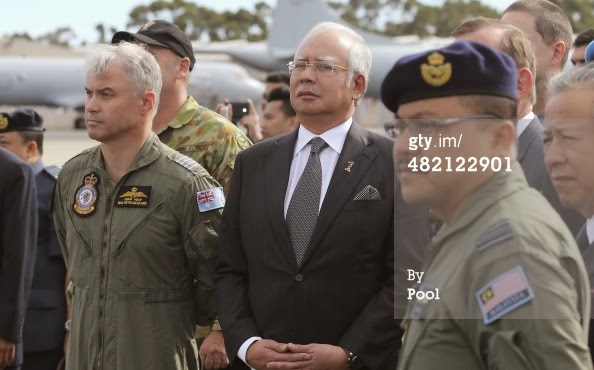 And yesterday Datuk Seri Najib arrived in Perth looking suitably gloomy and serious (as he should be!) but being greeted as he step on to the tarmac by that  “Raba Raba ex Washington envoy” guy grinning away stupidly while others around him remain somber!

And why is Najib in Perth when not a single piece of wreckage from MH370 has been found? We are told that he wants to thank all those who are helping out with the search for MH370…could not this be done from KL by calling in the envoy of each participating nation for an audience with our King and having the King convey a nation’s grateful thanks to these envoys?

But then Najib's advisers would demur because that would mean another lost opportunity for Najib to be on the world stage again…and this is yet another mortal booster (for Najib and Rosmah) to take another trip on that government jet at our expense!

Just a word of advise to Flom...I know the shopping is good in Murray Street Mall but you better not be seen anyway near any shops while in Perth! Those opposition guys have already instructed their guys in Perth to be on the lookout just in case you try to do some shopping while you are there. As you can see from the two images here, Flom has already had two changes of costumes....still got time to change ma!


As Kennedy once said "I am the man who accompanied Jacqueline Kennedy to Paris" ...so should Najib say the same of this trip to Perth! Why Rosmah or that Rab Raba guy and all those other guys from KL should accompany Najib to Perth is beyond me to comprehend....a waste of time and a waste of a bloody lot of our money!

The search for MH370, according to the Australian Prime Minister, has become "the most difficult in human history?. It is like looking for a needle in a haystack....and they have yet to find the haystack!

And one last thought....please Najib.......after Perth make sure you head straight  home to KL.......no shopping stops anyway along the route or outside the route...we will be watching you!