KARPAL SINGH : THE PASSING OF A GREAT MALAYSIAN! 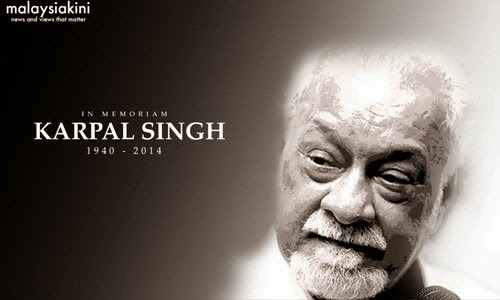 I read early this morning, with much sadness, the passing of one of our own, Karpal Singh...the man I thought would have best serve his retirement as Governor of Penang for he deserve nothing less.

Not Dato' Sri Karpal Singh, not Tan Sri Karpal Singh ....no he was just Karpal Singh s/o Ram Singh...and at most he would probably accept, the Tiger of Jelutong. We have lost a great Malaysian and nothing I say will do justice for this man.

Whether he is a Politician first and a Lawyer second or a Lawyer first and a Politician second  is moot, but he certainly is a Malaysian First! I am sure like me, many many Malaysians will hear of his death this morning and feel much love and a sense of deep loss at his passing.

Karpal feared no one....I cannot forget how, even when in a wheelchair, he stood his ground against those UMNO youth thugs who surrounded him in front of Parliament...and all his life he has done that in the face of any threats from any quarters.

I salute you Sir....and my condolences to his Family. We all feel your loss but be comforted that by his passing he has left a legacy that will surely be remembered by those that come after him for a very very long time....and excuse me while I shed a tear or two for this truly great Malaysian!  Alfatihah!

With deep regret I announce the passing of my father YB Karpal Singh.
- Gobind Singh Deo@GobindSinghDeo

News site Malaysiakini says Mr Singh's personal assistant was also killed in the crash, while his son, Ram, and the driver have been injured.
Mr Singh, 74, had been wheelchair bound since he was paralysed in another car accident in 2005.
He first entered parliament as the MP for Jelutong, where he earned the nickname "Tiger of Jelutong".
After losing his seat in the 1999 election, he returned to parliament in 2004, taking over as chairman of the Democratic Action Party (DAP).
He had recently relinquished that post while defending himself against sedition charges.
Politicians including Prime Minister Najib Razak have conveyed their shock and condolences via Twitter.

I have just landed at Ankara when I heard the news that YB Karpal Singh died in a road accident . My condolences to the family
- Malaysian PM Mohd Najib Tun Razak ‏@NajibRazak