Does Umno realize that we are no longer a nation of “Yes Sir Yes Sir, three bags full Sir”? 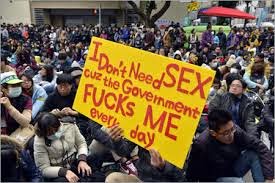 The sum of all its abuses in the time it has been in government are now beginning to outweigh all the good that it has done while in government in the past half a century! For Umno and the Barisan Nasional coalition it leads, the time for reckoning is nigh.
No longer can it hide behind any OSA, the ISA or any other A’s that it has put in place to deflect, dismiss and debunk the mounting criticism and disquiet that has been building up within the masses for the manner of government that Umno has burdened our nation with.
No longer can Umno protect it’s leaders from having to answer to the people of Malaysia for the pillaging and plundering of the country’s wealth to satisfy their greed and avarice – a familiar refrain that now permeates through the ranks of all its coalition partners in Barisan Nasional.

Armageddon is about to visit Umno to spawn its wrath and wreck asunder what Dato’ Onn Jaafar, Tunku, Tun Razak,  Tun Hussein and a vast array of Malaysians have taken many years to put into place in the time after Merdeka.

This Armageddon will herald the dismantling of the vast and tenacious tentacles that Umno has extended into the very lifeblood of its coalition partners, the Malays, the Chinese, the Indians, the Kadazans, Dayaks and many other Malaysians who have been voting Barisan Nasional into office for as long as we can remember!

Umno will say that for Barisan Nasional to no longer govern in Putrajaya there must exists a level of organization and coordination between the three coalition partners of Pakatan Rakyat -  PKR, DAP and PAS to work together to oust Barisan Nasional – a conspiracy theory even! Umno insists the opposition does not have the capability not the ability to coalesce what more offer a viable alternative government to the people of Malaysia.
And if you were to listen, read and believe what the mainstream media and television stations under their control invariably churns out you will think it was so!

And if you have come under the spell of BTN and other government linked organizations whose only reason for being is to promote the notion that Pakatan Rakyat and those who do not support Barisan Nasional are a threat to the nation’s national security, to the Malays, King and country…then you too will be thinking that without Umno there will be chaos and mayhem in a country whose multi racial population are ill equipped to handle freedom – both personal and civil without a government led by Umno.

How wrong can they be!

Anybody who cannot see the future that the people of Malaysian now want for themselves must surely be living in denial!

Denial of the changes that has been crystallized in the result of the last general election where the majority of the electorates have already dismissed Barisan Nasional as their preferred federal government!

Denial of the momentum that has irreversibly been infused into Malaysians of the need for change that will reflect the desire, nay the demand, for an end to corruption and the beginning of good decent leaders who will do government in Putrajaya for the common good of all Malaysians. And more overwhelmingly apparent……the demand to bring to justice all those who have perpetrated so much pain and suffering upon our nation and our people because they have abuse the trust our people have vested unto them when they were leaders of our country.

We must also not forget the need to give recognition and pay our dues to those who have suffered physical and mental harm and injustice under the BN government – especially since the coming of Mahathir.

All this will happen as sure as there will be a tomorrow…as sure as the sun will rise and set from the time that this Earth has come into being. We will see all this come to be in the very near future – maybe even before the next general election!

Look around you today. We are a nation crumbling under the weigh of our own self-inflicted burden of massive endemic corruption. Corruption that has now become part and parcel of the structure of government and of our society!

We have an Umno led  BN government that is so blind that it cannot see it’s own coming demise, so deaf that it cannot hear all the dire predictions and warnings of its own demise and so dumb that every sign of its coming demise is dismissed as a conspiracy by those intent upon the destruction of the Malay race, the Islamic religion and comically, Royalty!
And in the midst of all these conundrum the passing of one of our own, Karpal Singh, can only bring a sense of urgency to this unfinished business of change – change that has been long in coming despite the valiant and constant efforts of people like Karpal Singh.

Does Umno realize that we are no longer a nation of “Yes Sir Yes Sir, three bags full Sir”?
Umno no longer has the unqualified and unquestioning support from the very people they are champions of – the Malays! Political power for Umno no longer comes from the Malays but from Sabah and Sarawak. Umno governs like a racing dog without stamina always with an eye to the need to do what is best for themselves and their leaders rather than for the country and its people.

There are already enough of our numbers in parliament to ensure a robust opposition and outside parliament the alternate media and the internet are a presence much feared by politicians on both side of the divide. It will, at the very least, keep these political bastards honest in their dealings on pain of being expose for doing anything untoward.
There is a palpable and overt presence in the air that tells us that all will be well for our future because we the people are now in charge of it! The devil is in the details.

We are yet to gain the momentum that the People Power in the Philippines had when they mobilized themselves to oust Marcos. Nor do we have the enthusiasm of the Egyptians, the determination of the protestors in Thailand, Kiev, Istanbul and other cities where protests to push leaders of government that are corrupt and authoritarian are, at this very moment, being waged…but we are all united in that we want to oust leaders who have gerrymandered political systems, used money to win elections, tainted the judiciary, stifled media and muzzled civil society…. all done to secure political power.

Two issues make Malaysia different from many others. One, we have a government willing to use race and religion to rule and divide our people and two, despite extreme provocation from the Umno led Barisan Nasional government, the people of Malaysia have yet to willingly bypass democratic politics for street justice!

But this is an impasse that is likely to change in the blink of an eye. Already out of necessity, Umno is moving away from the two R’s – race and religion – simply because in the growing discontent of which the Malays themselves are embroiled in, the two R’s are double edged swords that can cut both ways for Umno.

Umno’s chief nemesis are Malays – Anwar Ibrahim from PKR and Hadi from Pas – and it is within PKR and Pas that the Malays are now massed in numbers large enough to constitute a threat to Umno’s claim to be the champion of the Malays. And so Umno must now look at new alliances to bolster their political survival come the 14th general election.

As for the people’s reluctance to bypass democratic politics for street justice it would not take much to push Malaysian over the edge as they are increasingly thwarted by draconian legislation preventing dissent through the democratic process and the heavy handed response of PDRM in the times that they are allowed to vent their dissatisfaction against corruption through the democratic process. Activism in Malaysia is today a process that invariably takes into consideration the need for street justice if one’s voice of dissent is to be heard.

If wiser heads are not to prevail the increasing edgy and fragile truce between political activism by opposition forces and the force being wielded by the government to ‘manage’ dissent outside and within Parliament will rapture.

As I have said before, the passing of Karpal Singh merely serves to focus our thoughts on the struggles he and many others have been engaged in – that of ensuring good governance in Malaysia and that reason and justice should prevail for all. If anything this would be as good a time as any, to pause and reflect where we need to go from here.

For the opposition let not Karpal’s passing be in vain. By all means appeal to the people’s sympathy for his death to bring whatever electoral advantage to Pakatan Rakyat it can but do so responsibly and with respect for what Karpal stood for whether in race, religion or politics - reason and integrity.

Reason and integrity should prevail in all things Malaysians for without reason and integrity we will certainly descend down to the hellhole of political, racial and religious fanaticism. And when we do it will be too late to ask where are the Karpal Singh’s that we need to guide us back to sanity?
Posted by STEADYAKU47 at Tuesday, April 22, 2014