National Security be DAMM. Najib and UMNO are involved in this Sabah caper! 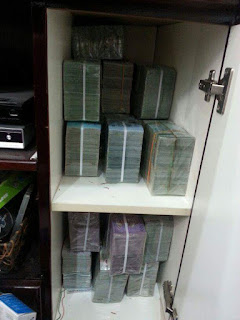 National security be damm. That Tweet of an IGP be damm.

Let me say what so many of you are now thinking about those 175 million ringgit seized in a case of abuse of power involving infrastructure projects valued at RM3.3 billion associated with two civil servants in Sabah recently by SPRM (MACC)!

You can trace it all back to some bloody politician....let me more specific....TO NAJIB RAZAK...TO UMNO! Those amount of money cannot be stolen, accumulated or stored away without the government of the day being complicit! Without PDRM and the authorities closing one eye and shutting the other!

And why do they need so much cash? 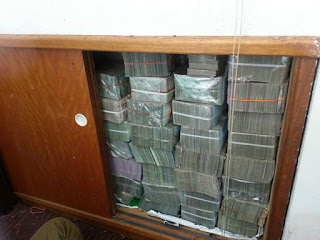 And what sort of a deal will be worked out with the Pengarah and his Timbalan?

The same sort of deal worked out with the murderers of Altantuya....those two, the Pengarah and his Timbalan, will have to fall on their own swords...spend time locked away somewhere and their family will be looked after and they too will be looked after when there are incarcerated. That way any investigation will stopped at the Pengarah and his Timbalan without going into the need as to why they have to have all the money in cash etc etc...remember Altantuya? They convicted the murderers without wanting to know why they had murdered her?

And what if they do not cooperate?

They know what happened to Jalil Ibrahim of Bank Bumiputra many many years ago! They know what has happened to to Hussain Najadi, to Kevin Morais....to Mahyuddin, to Anwar Ibrahim...."all punished" because they stood up against the Prime Minister and against Umno.

They know what happened to the Sultans when Umno decided that it was time for Umno to be in the driving seat and relegate the Sultans to be their drivers.

Time and time again Umno has done what they bloody well liked to serve their own vested interest and the interest of their leaders! 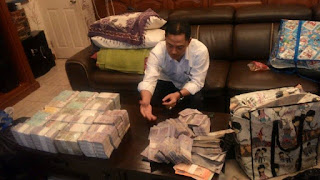 So let me say it again...this Pengarah and his Timbalan are just a front for Najib and Umno's need to build up their war chest for the coming election...and also to meet the "cash requirements" of Umno in Sabah! And they need a lot of "PELURU" in Sabah!

How long does it take to accumulate that much cash? You need an army of workers and helpers to put away that kind of cash in those neat bundles! Were not the bank any wiser by the amount of cash being taken out of their system?

Or were the Banks also complicit in this caper? Go check CIMB first! 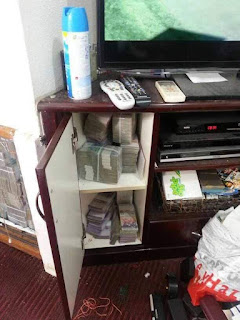 Let SPRM prove me wrong by doing all that needs to be done in this matter without fear or favor. I know that what I have said above merely serves to belittle SPRM and merely conforms my inability to believe that SPRM will be allowed to do what they must to investigate this matter by their political masters! .

I want to be proven wrong...and when I am proven wrong I will apologize to SPRM....but until then I am entitled to think that this investigation will go the way of Altantuya, the way of the AG and his 1MDB "investigation," .....the way that any investigation that could have possibly harmed Umno and Najib Razak has gone....down the gugler...stamped NFA (No Further action)! Ptui!