Robert Kuok : Only when the greedy grabbing of wealth & power stops, will Malaysia have a chance to progress. 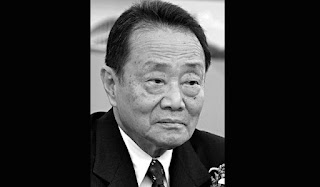 Malaysia's tycoons are investing heavily overseas instead of re-investing in Malaysia.

This definitely does not bode well for the country & her citizens.

As history past decades has shown, many of the Chinese businesses have been taken over by either GLCs or Malay businessmen aligned with politicians.

Bit by bit , many of the huge family corporations and big businesses are leaving for safer havens such as Singapore or Hong Kong, where they feel their fortunes and business empires are relatively safe and secure from greedy hands.

Come to think of it, it's an oxymoron.

On one hand, the Malaysian government tells us that they are trying to attract foreign investors / investments..

On the other, they are pushing away local investors (many of whom happens to be of Chinese ethnicity).

Another interesting reply from Robert Kuok in a Star interview below: ...

Asked about the sense of discrimination among the Chinese in Malaysia, Kuok demurred, saying:

"This will lead only to highly controversial statements, which is not good for anybody.
It may cause grief or hurt those Chinese who are living in Malaysia, one must never be the cause of any kind of inter-racial hostility.

To me, the future of Malaysia rests on the economy. It always has.

Only when the greedy grabbing of wealth & power stops, will Malaysia have a chance to progress.

Else, it will go downhill.

For now, the people can afford to make noise on a full stomach. Wait till their stomachs are empty.

All the racial & religious issues will lead to conflict when the economy tanks.

And it is prudent for politicians to stop playing up these issues, before they really get out of hand.

I'm not raising these points because these businesses are owned by the Chinese.

Businessmen are businessmen.Particularly the big fishes in the Chinese community.

Their wealth do not belong to all the Chinese. The point is, regardless of ethnicity, a growing economy is important to sustain this country.

More so for the Chinese whom are largely in the private sector. And many, many Chinese these days are losing hope.

The Malaysian economy and the Malays

Before the Malays start accusing & calling the Chinese unkind names, maybe they ought to pause and consider about how far they have come with a growing affluent middle-class and benefiting from affirmative policies.

Indirectly, It came from sacrifices by the normal non-Malays who had to give up some of their rights.

It came from the risks non-Malays had to make to build up their businesses, and then share it with Malay businessmen.

Whatever the Chinese own, they paid for it. They did not get it for free.

Some had to borrow from loan-sharks.,taking most of the risks. Most sacrificed family time.
Not all benefitted and became wildly successful. Some lost everything, fortunes & family.
At the lower spectrum, they sacrificed years working overseas illegally to save enough to buy their home & capital for business.
Posted by STEADYAKU47 at Monday, October 17, 2016