UMNO Kimanis is under Anifah Aman, our foreign minister and the brother of the CM of Sabah.


So this arrest is a warning to Sabah warlords to keep in line bcos Putrajaya must've smelled a defection is brewing and imminent. Hence, the reason why all the cash was kept in the office to facilitate disbursement on their political activities. Otherwise, it is ridiculous to keep so much cash in the office. If you looked at the jewelries and handbags seized, it did not commensurate with the amount of money they had bcos those handbags were not as expensive as those collected by Hippo.

Anifah is a loose cannon and a recalcitrant and didn't want the cabinet post offered to him earlier until much coaxing by his bro the CM.


He once blasted out at the reporter by saying he was NOT the babysitter for Riza Aziz when he was asked by Najib to take care of Riza departure from NY. He also jived at Riza by saying he didn't have a private jet to fly back home.....

[10/7, 1:34 PM] Datuk Anifah Aman: Good afternoon to all of you.
I haven't got the time to follow on what have been written in other apps except friends sending some to me. That Director had never been treasurer in my division. As Foreign Minister there is nothing I can offer to anyone. I don't control the funds for the water dept. It is best to know where the funds coming from n who has the power to approve them.
So my fellow Sabahans I can proudly say to you that not only I am not involved but I did not know these funds or projects exist.

May be I can seek some of you my fellow friends to take actions to people who try to defame me cos I am known to most FM in this planet n I don't want some of them to think that the FM of Malaysia is corrupt n more importantly to clear my name.
[10/7, 1:36 PM] Datuk Anifah Aman: 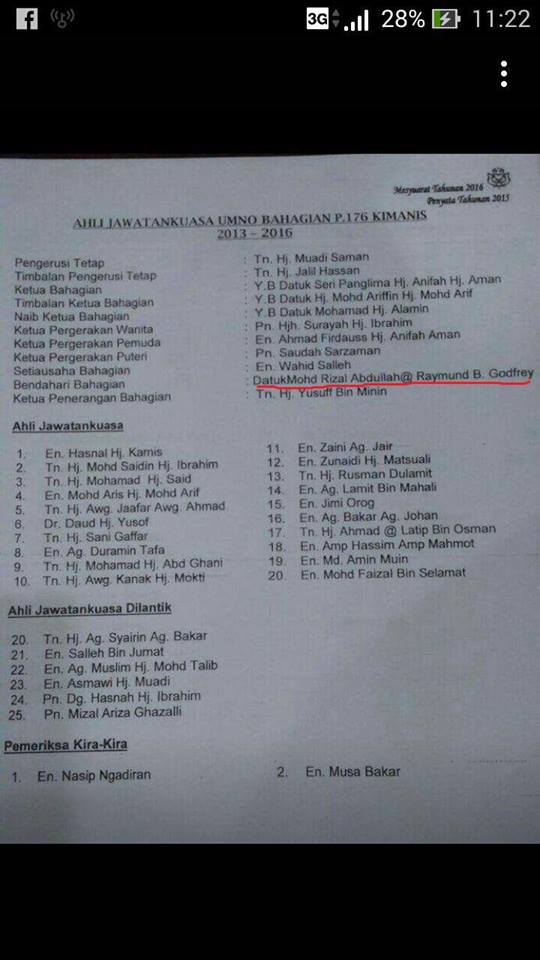 steadyaku47 comment : If the above list of Office Bearers is correct...then that Pengarah is NOT the Umno Bendahari at Kimanis.
Posted by STEADYAKU47 at Friday, October 07, 2016