C. SUGUMARAN: “No other injuries could have caused his death,” Why do I not believe this? 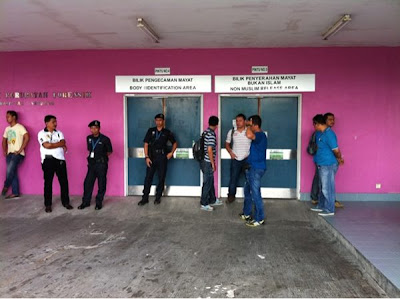 The police have denied beating a security guard yesterday to death, pointing out that a post-mortem today revealed that he had died of a heart attack.

Three eyewitnesses alleged earlier today that four policemen had handcuffed and then assaulted 39-year-old C. Sugumaran together with a mob of more than 20 yesterday evening near the latter’s house at Batu 12, Hulu Langat.

He added that three policemen in a patrol car and a motorbike tailed Sugumaran, who was on foot, for about two kilometres from Dusun Sri Nanding to Taman Lagenda Suria in Hulu Langat as the latter waved an iron rod, destroying flower vases near houses and electrical wires, until he fell down in the middle of the road.

“The police, assisted by members of the public, held and handcuffed the man as he was still acting aggressively and trying to struggle during arrest,” said Abdul Rashid, stressing that the crowd did not assault Sugumaran.

Sugumaran’s neighbours who claim they saw four policemen and a mob of 20 to 30 people beating him up. From left: R. Moohanarajan, S. Sugunan, R. Vasandh.
He added that a police officer then went to get a Land Rover to bring Sugumaran, described as a big-sized man, to the police station.

“But upon return, the Indian man was unconscious. The police then contacted the hospital and a medical officer came and pronounced him dead,” said Abdul Rashid.

The policeman stressed that a post-mortem done by pathologist Dr Mohd Azaini Ibrahim from Serdang Hospital today from 3.30pm to 8.30pm revealed that Sugumaran had died of a heart attack.

“No other injuries could have caused his death,” said Abdul Rashid.

He also said that the policemen did not throw turmeric powder in Sugumaran’s face as alleged by eyewitnesses earlier today.

Eyewitnesses had told reporters earlier today that the security guard was chased down yesterday by four policemen who subsequently handcuffed and beat him to death together with a mob of more than 20 people in Hulu Langat yesterday.

They said that after the policemen caught and handcuffed him, more than 20 other men from a nearby restaurant joined the policemen and proceeded to assault him.

“Twenty to thirty people wearing plain clothes beat him up. He was lying facedown with his hands handcuffed behind,” added Moohanarajan, who was Sugumaran’s neighbour.-malaysian insider
Posted by STEADYAKU47 at Friday, January 25, 2013